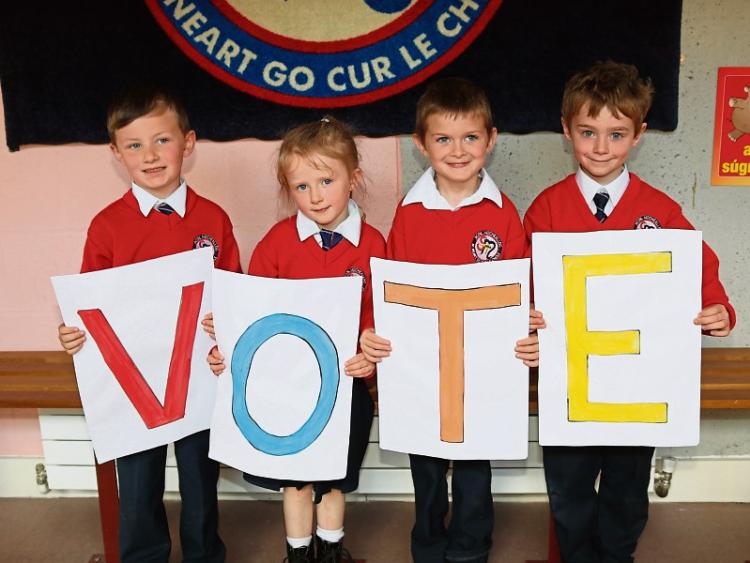 These four pupils from Scoil Mocheallog primary school in Kilmallock are urging the people of Limerick county and city to cast their vote on Friday! Picture: Michael Cowhey y

WHICH of the 14 candidates in Cappamore-Kilmallock will be among the lucky seven to be elected? With nearly half of the sitting councillors stepping down it is guaranteed there will be new faces representing the municipal area after May 24.

Fianna Fail's Noel Gleeson, Independent Lisa Marie Sheehy and Fine Gael’s Bill O’Donnell have all announced that they won’t be seeking re-election. Between them they took a whopping 30% of the first preferences in 2014.

New faces are guaranteed to represent Cappamore-Kilmallock but there could be some returning ones.

Former councillor, John Egan, Fine Gael, narrowly lost out last time with 1,165 first preferences while another ex-councillor, Joe Meagher, polled 982 as an independent. This time he has the backing of Fianna Fail.

Both the big parties are running four. This backfired last time for Fine Gael as John Egan and Mike Houlihan lost their seats.

For a while Cllr Donegan must have thought he was in clover as the only candidate in Kilmallock - the municipal district’s biggest town but the Social Democrats put paid to that with Trevor McCarthy as their candidate. Fine Gael added Kilmallock Fire Station officer Greg Conway. PJ Carey, Independent, makes it four Kilmallock men running. It is all set for a battle royale in the Balbec.

The big surprise in 2014 was the success of Sinn Fein's Lisa Marie Sheehy. She subsequently left the party and then announced she wouldn’t be seeking re-election as an Independent. Sinn Fein’s candidate this time is Jim Hickey from Ballylanders.

Another trying to break the FF and FG dominance in this rural area is the Social Democrats' Trevor McCarthy. Knockainey’s Shane Hogan, of Aontú, is another hoping to resonate with voters. Voters have no problem backing an Independent as proved by  Cllr Teefy so Mr Carey will be hoping he also garners support as an Independent. Ballylanders farmer John O’Gorman, running as an Independent, will also be hoping to ruffle the feathers of the bigger parties.

Cappamore-Kilmallock is a massive area to canvass. For example, from Doon to O’Rourke’s Cross is 43kms while going from Caherconlish to Kilbehenny is 53kms. Shoes will be worn down to the sole and tyres will need to be replaced.

If the town of Kilmallock is a battle ground then so too is east Limerick. Ms Stokes in Pallasgreen; Mr Egan, Murroe; Mr Ryan, Cappamore and Mr Meagher, Oola will be going toe-to-toe for number ones.

There’s no doubt the local election results in Cappamore-Kilmallock will be an interesting political barometer of rural Ireland.