Over 35,000 to throng LIT Gaelic Grounds for Limerick-Cork clash 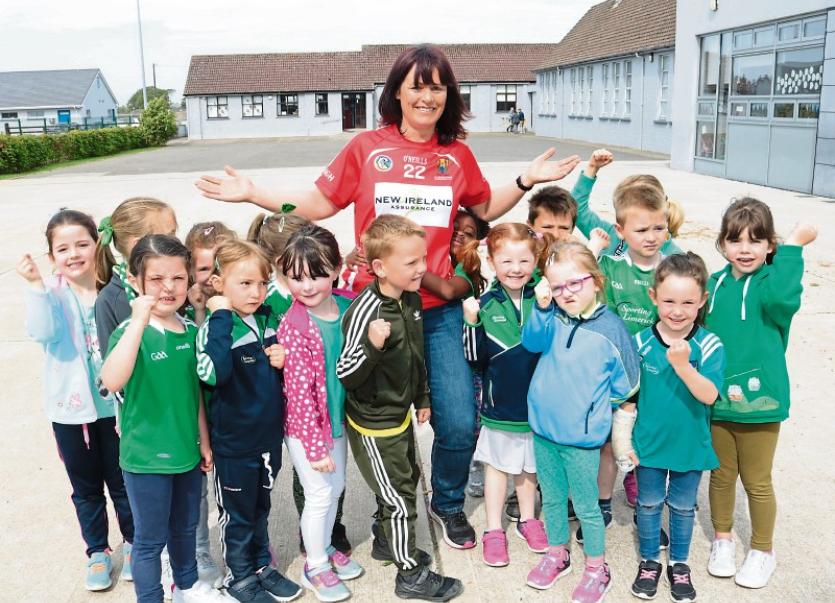 Cork camogie intermediate France Killeen is supporting the Rebels but the pupils in St Patrick's NS, Bruree are having none of it! | Picture: Michael Cowhey

IT FEELS like yesterday that Limerick won the All-Ireland but they are back in championship action on Sunday against Cork in the LIT Gaelic Grounds at 4pm.

A crowd of over 35,000 is expected. The buzz is building across the county and especially where the two counties collide. In St Patrick’s NS, Bruree, they have a proud Rebel in their midst.

Frances Killeen, SNA, played camogie for Cork and is now the manager of the Cork intermediate camogie team. The school’s 190 pupils donned green to show their support for Limerick this week with Ms Killeen the only one in red

“I'm down here nearly ten years now so I'm used to being outnumbered,” she laughed.

“It’s brilliant fun. I’m from Ballyhea and went to school in St Mary’s in Charleville. It was fantastic because half were Cork and half were Limerick. There’s a natural rivalry that exists in that school which is great."

Who will have the bragging rights in the Bruree school on Monday morning? Ms Killeen’s heart says Cork but her head says Limerick.

“Cork will have to do something or their season could be ending very early. You never know, if it’s a fine sunny day it might suit Cork. I'm very much a Cork woman but I actually played with Limerick in my teenage years so I have a good fondness for Limerick as well," said Ms Killeen.

Principal of St Patrick’s NS, Bruree, Ger Kelleher is from Athlacca and he has no divided loyalties!

“A huge number of the kids are going to the match and have tickets booked. This is a big hurling area so they are all going to be supporting Limerick.”

“If Cork are beaten on Sunday it could be very close to putting them out. They’ve a game under their belts, they will make changes, they are going to be dangerous opposition. I still expect Limerick to win. I think we will be good enough to win. If we bring any level of what we produced last year to Sunday I think we’ll win. It’s great to look forward to it again,” said Mr McDonogh. The hard as nails corner back says the Limerick panel have a great attitude.

“They’ve had a taste of success and they want more of it. Success gives fierce confidence.  They’ve won an All-Ireland, the monkey is off the back, the pressure is off and I think Limerick are improving all the time. While trying to carry the mantle of champions isn’t easy I think these boys are different. They are a great bunch of lads,” said Mr McDonogh.

Terrace tickets will be on sale outside the ground on Sunday. Terrace tickets can be pre-purchased at €15 up to Saturday midnight in Centra and SuperValu outlets but will be €20 at the match venue.