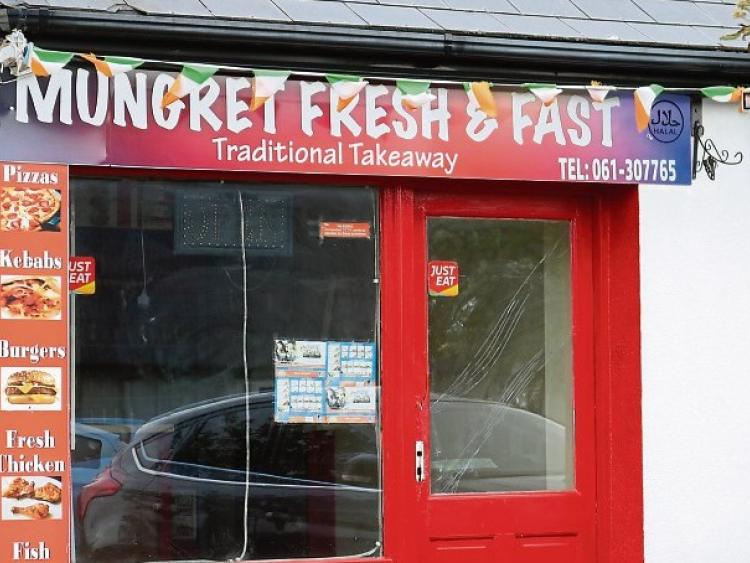 The scene at Mungret Fresh and Fast this Thursday morning PICTURE: MICHAEL COWHEY

RESIDENTS in a Limerick suburb are in “shock and feeling insecure” following the second break in at a local business in less than two days.

Mungret Fresh and Fast, also known as Mungret Kebab, in the village of Mungret was broken into during the early hours this Thursday morning.

After forcing an entry to the premises by breaking the door, burglars made off with the takeaway till, which did not have any cash in it at the time, and a number of documents and personal items.

“This break in and robbery in Mungret along with the recent one of Plush Beauty has left many people locally in shock and feeling insecure,” Metropolitan Mayor Daniel Butler said.

Gardaí are currently also investigating a burglary at Plush Beauty Salon on Father Russell Road during the early hours of Tuesday morning.

The salon shared an image of the damage to the business on Facebook, and said that the windows had been broken and the till had been “ripped out”.

Mayor Butler said: “Both businesses are small units trying to pay staff and overheads and possibly a living for its owners so these breaks ins are hugely detrimental for their survival.”

“I have spoken with local Gardai and have continued to call for more patrols to deal not just with these incidents but regular incidents of anti social behaviour by a small group of young males.”

“I would appeal to anyone with information to contact the Gardai at Roxboro so we can achieve a prosecution.”

The incident at Mungret Fresh and Fast has been reported to the gardaí.