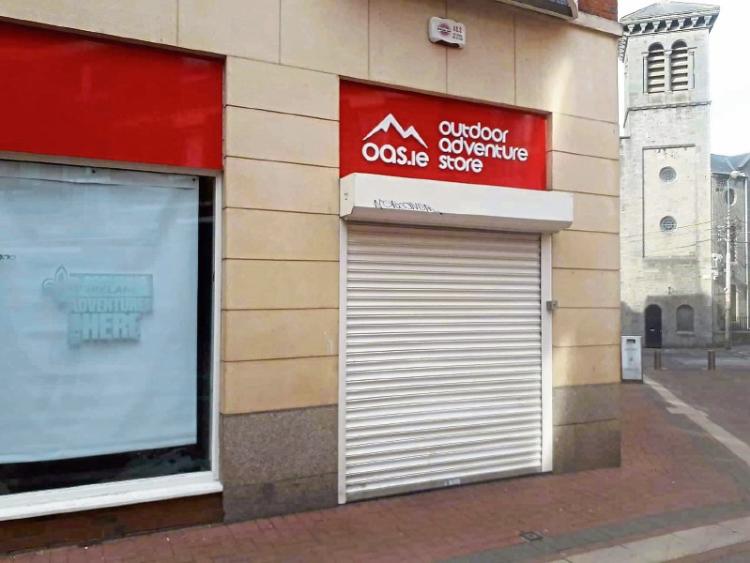 Outdoor Adventure Store has closed its doors in Cruises Street

LIMERICK city centre has been dealt a fresh blow this week, after it emerged that another store is to close in Cruises Street.

The Limerick Leader has learnt that staff at the Outdoor Adventure Store in the street has now shut down.

It’s understood staff were called in on Tuesday morning, and ​told their jobs were gone.

It took a unit previously occupied by Mothercare.

Fianna Fail councillor and local businessman Jerry O’Dea said: “It's devastating for the people working there and its unfortunate for the area. We are trying to get the city competing with the outer suburbs, and it's; a shame a chain providing employment and alternative shopping seems to have to close for whatever reason.”

He said it once again raises question marks about the viability of Cruises Street, which has seen a raft of high-profile closures in recent months.

“There has been a lot of talk about that. The street is not suitable in the way it's designed. The floor plates are not big enough for the large multi-nationals and retail chains. In the absence of it beingf redeveloped, we need to see Limerick providing more unique shopping for people, and I think that's the way forward,” he added.

He wrote on Twiter: “Hearing news that the Outdoor Adventure Store on Cruises Street has now shut its doors for last time. Yet another sign that this street needs radical rethink. Continued closures will do nothing for confidence of potential investors. Time for change.”

Hearing news that the Outdoor Adventure Store on Cruises St has now shut its doors for last time. Yet another sign that this street needs radical rethink. Continued closures will do nothing for confidence of potential investors. Time for change #limerick pic.twitter.com/MDi0xQQami

Outdoor Adventure Store did not respond to a request for comment from Business Leader. But local sources have confirmed the closure.

Earlier this year, retail guru David Fitzsimons was commissioned to tackle the issues facing Cruises Street and the city centre as a whole.

Mr Fitzsimons, of Retail Excellence Ireland has been asked to carry out a retail strategy to help the ailing street.

Opened in 1992, Cruises Street had the worst possible start to 2019 when two retailers closed in quick succession: Korky’s and Art & Hobby.