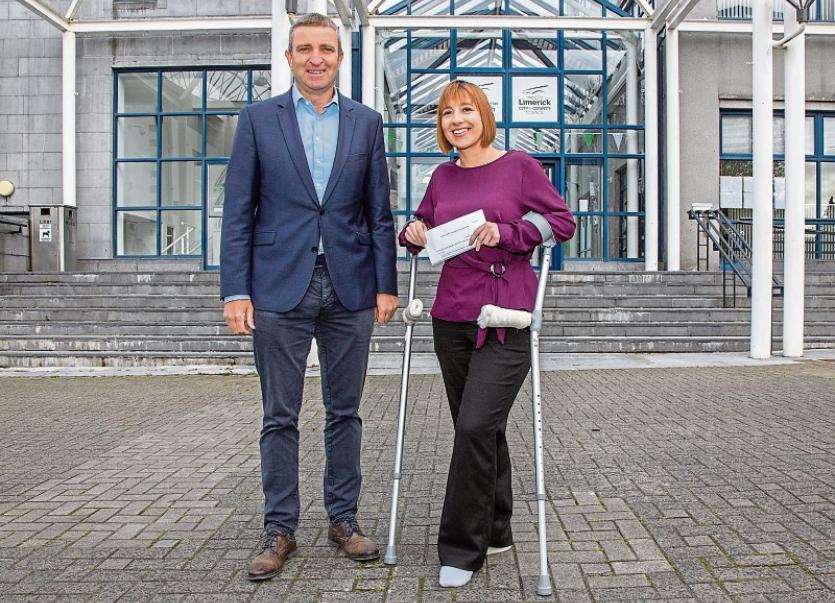 A LOCAL election candidate, who has been left on crutches after she was attacked by a dog while out canvassing, has submitted her nomination papers to Limerick City and County Council.

First time Fianna Fáil local election candidate in the Adare Rathkeale area Trina O’Dea must attend University Hospital Limerick every 48 hours for medical treatment after she was badly bitten by a dog in the Ballyneety area on April 30.

“I’m very grateful for the support I’ve received over the last week or so,” Ms O’Dea said.

“It has been overwhelming, I’m very fortunate to have a number of people who have stepped in for me on the canvass trail,” she added.

“People from within the Fianna Fáil party membership, my family, friends and local supporters.”

The bite inflicted on Ms O’Dea was “so deep the doctor could put his fingers straight in” to her wounds and touch the bone in her shin, Ms O’Dea previously told the Limerick Leader.

“Because of the extent of the wounds, in other words how deep and long they are, this dog was narrowly close to taking away a severe chunk of my skin and leaving my leg wide open. They told me in A&E that it was the worst dog bite they had seen in a longtime.”

Ms O’Dea also required an X-ray, to ensure the animal did not leave teeth behind in her leg, and doctors also had to use three litres of fluids to thoroughly clean her wounds, which required urgent care due to the highly infectious nature of dog bites.

Following the incident, Ms O’Dea must use crutches to get around due to her injuries, she added.

“The show must go on and thanks to the support of my family and friends I’m doing just that.

“I’m not sure how long I’ll be off my foot but I’ll continue to do as much as I can to speak to and meet with as many people as I can over the next two weeks.

“However, if I have not met you and you would like for me to call, let me know and I’ll do my best to get to you,” the Fianna Fail candidate said.