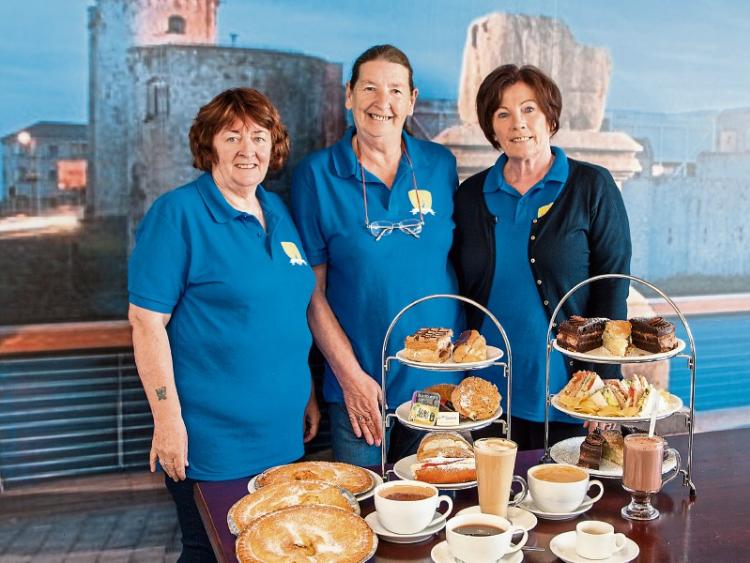 Geraldine, Anne and Theresa, the team behind the afternoon tea service at St Munchin's Community Centre

A POPULAR northside centre has launched a raft of new initiatives to make it even more accessible to the community that it serves in Limerick.

St Munchin’s Community Enterprise Centre at Kileely Court is to offer visitations to vulnerable people, and afternoon tea. This goes alongside their hugely successful Meals on Wheels service which delivers hot, affordable food to hundreds of people across the city.

Quite often, people living alone are lonely, struggling financially and short on company.

The visitation scheme has been started after centre manager Linda Ledger and Theresa Cusack began to work closely with the Education and Training Board on caring for the elderly.

“We can go to your house, ask how you are, perhaps do a little bit of shopping. Alice Hayes and Rita Danaher will be heading this up for us,” Linda explains.

Alice, who is from Caherdavin, says: “We’d arrive at the house, say who we are, and go in and talk to them for a few minutes. There is often a lot of self-neglect in people living on their own. They’ve let the house go too much, and they need things doing.”

Often-times this could happen when someone comes out of hospital and are not as mobile as they used to be, Linda said.

Ultimately, the scheme – which is being run in conjunction with the Department of Social Protection – could save the state money, as it will keep more people at home for longer, and out of hospital, or in care facilities.

Linda said: “This is about us going out there. We are giving care to people who would not perhaps give it to themselves.”

The initial meeting with centre staff in people’s homes would be around 30 minutes establishing their needs, and what it will take to keep them out of hospital.

“If it’s the grass cut in the back, or a little bit of shopping,” Linda explains, “But we’re not going to take over or be someone’s slaves, and we don’t want to help someone who is well able to go out. It’s all about what it takes to keep you out of hospital.”

The service, Linda said, will be non-judgemental, acknowledging there can be a huge number of reasons why people do not have the support perhaps they should in later life.

Management at St Munchin’s Community Centre have also started another new service after identifying another need of older people in the community. From now on, the centre will open to 4pm to serve afternoon tea.

“What we do find is a lot of people are lonely and now it’s coming into the summer, they don’t want to go home. They just want somewhere to hang out,” she explained, “There is nowhere out here to go just for a cup of tea and a scone.”

Meanwhile, the Meals on Wheels service goes from strength to strength and remains vitally important to so many people across the city.

Illustrating this, Theresa says: “Say your mother is isolated, perhaps living ten miles out, and you’re at work all day. To have someone come in and ask how are you, and would you like something to eat. That’s how important is, even to have an auld chat.”

Each morning, three vans go out to homes right across Limerick – and in some cases further afield.

Some 26 people are employed by the service too.

More than 2,000 people across the city benefit from the many services provided through the St Munchin’s Community Centre, which has a presence in 24 locations in Limerick.

And new schemes are on the way, with Linda saying there could be support provided soon in the areas of using smart-phones and computers, as well as story-telling.

Perhaps one of the most pleasing aspects for the centre staff is seeing the friendships which have been formed by regular attendees.

Liam Galligan, one of the managers, explains: “What’s happened now is they are striking up conversations when they come in, the group is getting bigger, and particularly during the summer, what you find is people enjoying a walk or a pint together.”

“They are driving one another now which I love, say if one of them has a pint, the other drives,” Alice adds.

The centre’s growth is due to money from JP McManus, and Linda is full of praise for the businessman.

“Without JP we would be nowhere. The money he gave us, it helped us take over the old St Leila’s School [which is now an age friendly centre],” she said. “JP has done more for here than people will ever know.”

At its heart ultimately, St Munchin’s is a hugely supportive, friendly facility.

Linda probably best sums it up when she says: “It’s community people helping each other. I think that’s the key to here.”