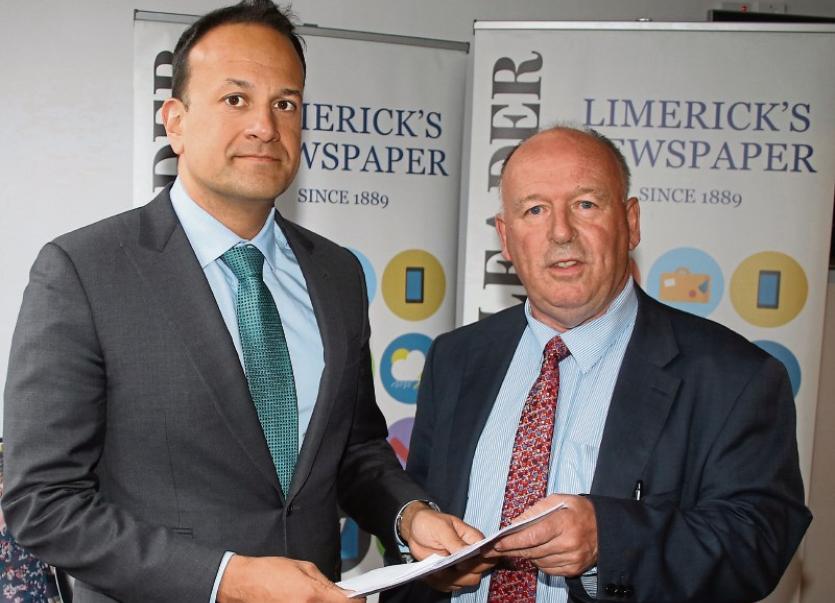 Limerick Leader editor, Eugene Phelan with Taoiseach Leo Varadkar after he handed over a file with the testimony of over 450 people who contacted the paper regarding the overcrowding

TAOISEACH Leo Varadkar has defended the commissioning of an ‘independent expert review’ into the University Hospital Limerick trolley crisis.

The “enhanced expert review” of the UHL emergency department was announced by Minister for Health Simon Harris last week following calls from Mid-West TDs for an investigator to examine the hospital’s overcrowding crisis.

During an interview with the Limerick Leader, Mr Varadkar was asked what will this review find that isn’t already in the public domain, the Taoiseach said: “We can’t really preempt the outcome of an independent review.”

“The whole point of it being independent is it is not predetermined what it’s going to find but I think what it can do is help us to plan ahead. It will help us to make sure that when those 60 beds open next year,” he added.

“That they don’t just get clogged up and that it makes a real difference in terms of patients going through the hospital much more quickly. I think that is the way I would see it, is that the extra resources are happening.

“The budget has been going up every year for a few years, there are more staff every year.”

The taoiseach pointed out there will be more beds next year and the outcome of this independent review would maybe help work out how the cycle can be broken and who needs to do what to accomplish change.

“It’s about getting the 150 people in the system doing the right thing. Some of them might be working really hard but they mightn’t realise that they need to do things a bit differently,” he added.

The review follows calls from Mid-West TDs after UHL set a new record for highest number of patients on trolleys on April 4.

The HSE has since advised that a clinical review will take place for all hospital groups and community health organisations across the country, but will start with the UL Hospitals Group and its emergency department.  There were 1,206 patients on a trolley in April at UHL, the worst ever recorded April in national overcrowding since records began in 2006.