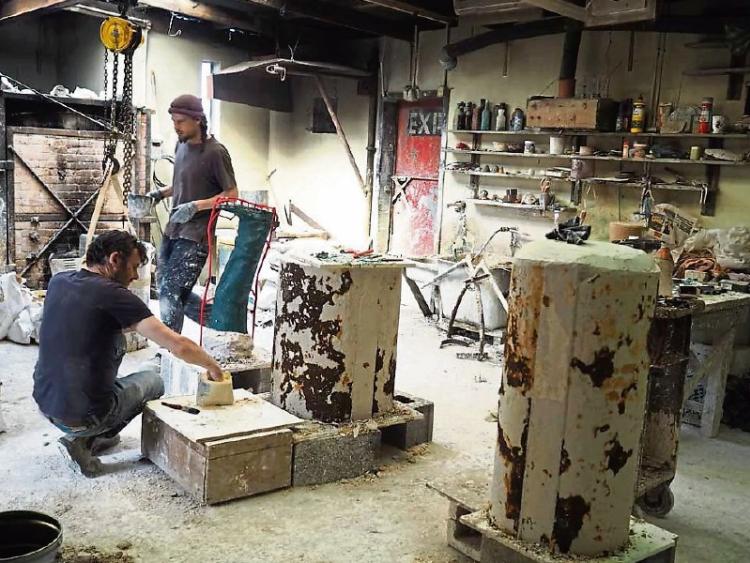 Sculptor Seamus Connolly, kneeling, working alongside Adam Pomeroy on the leg of the JFK statue

PREPARATIONS are at the final stages for what will be a red-letter day in Bruff, as the town honours its most famous descendant.

On the afternoon of May Day, May 1, a life-sized bronze sculpture of John F Kennedy, whose political genes go right back to South Limerick will be unveiled by the vice-president of the European parliament Mairead McGuinness.

The grandfather of the 35th president of the USA John ‘Honey Fitz’ Fitzgerald was the son of Thomas Fitzgerald, who left Bruff in 1852.

From there, Honey Fitz became the first son of an Irish emigrant to crack Boston politics, becoming city mayor.

In 1852, Michael Hannon from nearby Lough Gur emigrated to America, where he met and married Mary Anne Fitzgerald, also from Bruff. Thomas’s first cousin Mary Anne Hannon married Honey Fitz, with their daughter Rose being the mother of JFK.

Mark Nagle, of Eurospar, and a member of the steering committee behind the delivery of the statue by top sculptor Seamus Connolly, has revealed it will be located on the roadside “just north of the Catholic church” in the town, and in close proximity to the Thomas Fitzgerald centre.

“In the same way a picture paints a thousand words, this statue will do the same. We’ll be able to tell the story of JFK and how his ancestors left Bruff with just a bible in their hands, and how a couple of generations later, that same bible was used at JFK’s inauguration,” he said.

“It’s another string to the bow of our tourism offering in Limerick: it’s a story which never gets old.

“It’s how a family can leave in relative poverty and within a couple of generations become one of the most powerful in the world. Through hard work, endeavour and a strong faith,” Mr Nagle said.

The businessman acknowledged there is some catching-up to do, with generations of people associating the Kennedy family with County Wexford.

“That’s been the narrative for a number of decades now. So we are making up for lost time, making people aware of the connection the Fitzgerald-Kennedys has with Bruff, Lough Gur and the surrounding areas.”

Speaking to the Limerick Leader, Mr Connolly revealed the statue will have a representation of the bible his grandfather travelled with at the heart of it.

“When the great grandfather left Bruff in the late 1800s, he had his bible with him. That was the same bible JFK then used to swear his pledge of allegiance. It was a Catholic bible, and he was the first Catholic president. The community wanted a nod to that on the statue,” he explained.

Mr Connolly has spent a number of months putting together the sculpture, initially building it up in clay, before casting it in bronze.

He’s no stranger to having statues erected in Limerick: the Mick Mackey statue in Castleconnell is his work, as is the depiction of the late Munster star Anthony Foley (the bronze sculpture in Shannon Rugby Club, as opposed to the one on the riverside).

This project, Mr Nagle said, has been in the pipeline for a number of years, with groups working together to bring it to fruition. They include the Bruff Tidy Towns committee, the heritage group, the local GAA club and the Bruff-Grange-Meanus Community Council.

The unveiling will take place at 2pm on May 1, adjacent to the Thomas Fitzgerald Centre.