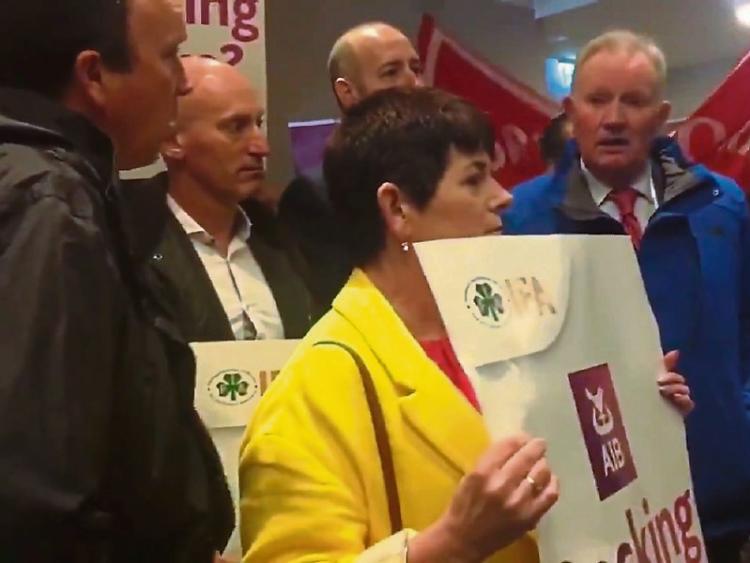 IFA protesters at the AIB AGM this Wednesday

TWO LIMERICK men led the IFA protest into the Ballsbridge Hotel this Wednesday where the AIB AGM is being held.

Deputy president, Richard Kennedy, from Clarina and Oola’s Martin Stapleton, IFA farm business chairman, both addressed the room. The IFA has committed this Wednesday to a sustained campaign against AIB’s proposal to include certain farmer loans as part of its recently announced loan sale.

Speaking as part of a group of IFA members outside the AIB AGM in Dublin, Mr Stapleton said: “It is wrong that AIB would sell these loans to a vulture fund, that is not interested in resolving issues by entering into long-term arrangements with farmers.”

He continued: “This decision flies in the face of AIB’s marketing campaign which is built around ‘backing brave’. We want AIB to remove loans from the sale that have been restructured, or where the farmer is making a genuine attempt to pay or negotiate with the bank”.

“We bailed out this bank when it was on its knees, but there is no such mechanism in place for people who are genuinely doing their best to meet their repayments. The sale of farm loans occurs without any clear selection criteria being provided to the borrower. There is no transparency in how AIB approach these sales. The minister for finance needs to intervene to ensure that AIB is not allowed to abandon the Irish people. Farmers contributed significantly to keeping those very banks afloat during the crisis.

“AIB engaged with many of these individual cases in the pursuit of a resolution, but they then continued with the sales. This gave false hope to farmers who are under serious pressure,” said Mr Stapleton.

Over the next few weeks, he said IFA will be bringing their campaign around Ireland.

“We intend to have a rolling presence outside branches around the country reminding customers about how these farmers have been treated by AIB and insisting that such loans are removed from the sale portfolio,” he said.

Mr Kennedy said Wednesday’s protest is the beginning of their campaign.

“We will continue to support our members throughout the country who are genuine and want to pay back their loans to AIB. AIB cannot be allowed to sell these loans of genuine farmers.

“I want to assure the genuine farmers out there who are in difficulty through no fault of their own and who want to pay back their loans that we in IFA will support them to the very last and we will continue this campaign until AIB reverses this decision,” said Mr Kennedy, to loud cheers.