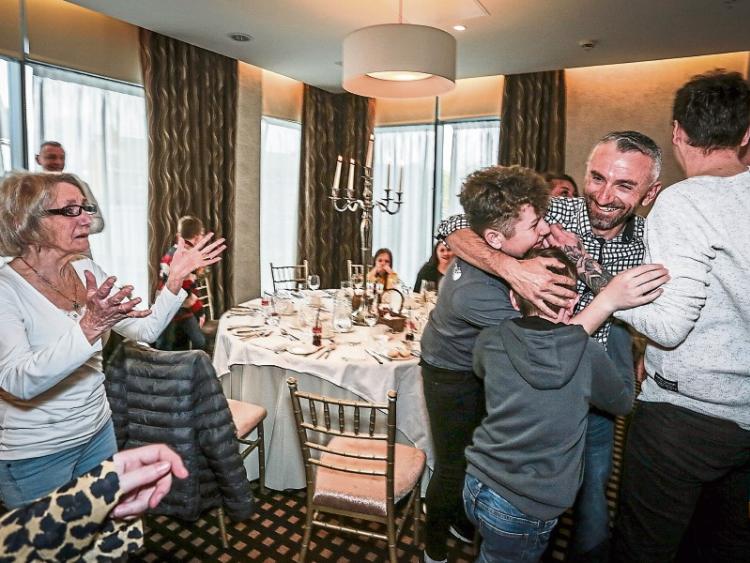 A LIMERICK man who returned home for the first time in 18 years has finally been able to pay tribute to his late father, after he was unable to attend his funeral last year.

In 2001, Patrick Geoghegan followed his sister to live the American dream when he was just 18 and has been living in Boston ever since, and is now a subcontractor in the construction industry.

However, up until last week, the Moyross native was not able to leave the States and return due to visa issues, claiming that if he left the US, he would have faced a 10-year ban. “Once I got there, I overstayed my visa and, of course, the parents were like: ‘Don’t come back, don’t come back’. They were coming over to see me. Then my brother came over and he eventually moved over,” Patrick told the Leader.

“He had only come back the once and that was last year, and that was when my father died. That was his first time back and the sister came back. But obviously I couldn’t get back for that so it was kind of brutal.”

His inability to come home became a “brutal” reality when his father Damien died in March 2018 and, as a result, Patrick was unable to attend the funeral.

But thanks to a live streaming broadcast from Corpus Christi church and a FaceTime feed through his sister, Patrick was able, in some way, to say farewell with his family.

He said his sister FaceTimed him as their father’s coffin was being lowered into the ground.

On April 7, Patrick was finally able to return to his hometown, but decided to keep it hush-hush so he could surprise his mum Christine.

Smoothly-orchestrated, Patrick was able to round up the family for a birthday function at the Strand Hotel where everyone was left nonplussed as he waltzed into a room to embrace his nearest and dearest.

My father gave me a lifelong passion for fishing. Long walks up the tracks with him to fish at The Bleach. Today I finally got to pay tribute to that and him. Together with my brother @damiengtattoo we came up with this design. The silhouette is from a picture I took of him in Boston, the fishing line from the fish mouth to the tip of the rod is the road from Limerick to Dublin. I barely made it through but it was worth every ounce of pain.

During his time in Limerick, Patrick was able to reunite with his five brothers and two sisters, as well as meet some younger relatives whom he had never met until last week.

“Seeing them grow, and you miss out on so much, you don’t realise it when you are away. It’s crazy,” he said.

“There is so much that I wanted to do, and I was like: ‘I can’t wait to go back and do this and do that’. But you don’t have time because you are trying to see everyone, too, you know? So you’re trying to take in as much as possible.”

But the important task on his itinerary was to pay tribute to his father Damien. During the funeral, his brother took a rock from their father’s grave and gave it to Patrick so he could place it on his grave.

“It’s almost 13 months since he passed away. It was 17 years since I was here before. But you can’t look back with regret, you know?”

In addition, he got a special tattoo commemorating his dad which was, appropriately, inked up by Patrick’s brother.

He said another highlight of his sojourn to Limerick was his reunion with Chicken Hut’s signature gravy.

“But one thing I did get to do that I have been craving for 18 years is the super snack box from the Chicken Hut. I had it the other night, and it was probably one o’clock in the morning, and I was debating it, like: ‘It probably won’t be as good.’ It was just as good.”

Mouth is watering thinking about this now. Whatever about GOT, imagine having to wait 18 years for the Chicken Hut? It was well worth the wait, but I’ll never do that to my taste buds again. I’ll be back again in a few months. Thank you @chickenhut1 for still being so damn good after all this time. . . . . . . . #chickenhut #limerick #thatslimerickcity #yurt #thatslimerickcitay #chicken #limerickfoodie