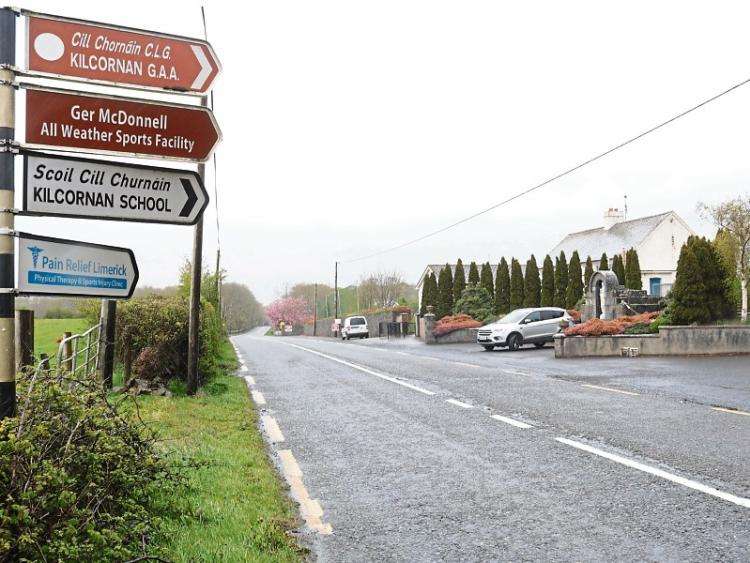 Cllr Emmett O'Brien: Turning right at the entrance to the Ger McDonnell all-weather playing facility coming from Askeaton can be particularly hazardous and there have been a number of collisions there

COUNCILLORS have welcomed plans for road safety works outside a primary school on one of the busiest roads in County Limerick.

Members of the Adare-Rathkeale Municipal District have endorsed the improvement works which will see traffic calming measures installed on the N69 at Kilcornan.

A public consultation process was carried out earlier this year to gauge local reaction to the proposed works which will take place along a 750 metre section of the road.

In a report to councillors, Conn Murray CEO of Limerick City and County Council, stated a public consultation meeting in February was well-attended and that 15 written submissions were received in relation to the plans – most of them positive.

The local authority says the road will be narrowed slightly, a footpath will be installed outside Kilcornan National School while signage and road markings will be upgraded.

Public lighting will also be installed as part of the works and the entrance to the community centre will be widened.

Briefing councillors at their April meeting, executive engineer Kevin Murphy said both Kilcornan NS and Kilcornan Community Council are supportive of the proposed works and that a formal agreement has been reached which will see the car park at the community centre being used by the school and parents.

“This is a project that I have been fighting for since 2015. Turning right at the entrance to the Ger McDonnell all-weather playing facility coming from Askeaton can be particularly hazardous and there have been a number of collisions there over the last number of years here. I would like to thank the patience of the people of Kilcornan and surrounds with respect to the roll-out of this project,” he said.

Cllr Kevin Sheahan, who seconded the proposed works, praised the council staff who engaged with members of the local community during the consultation process. “Now that we have started, let’s complete the job,” he said.