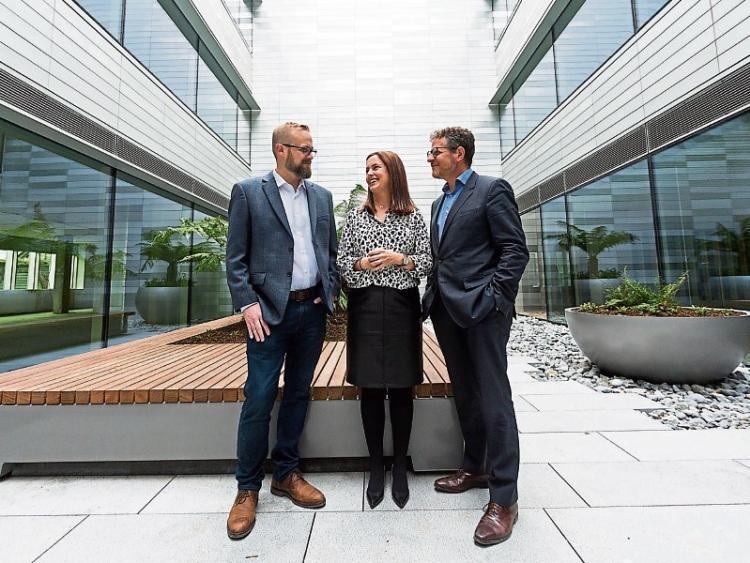 I EXPLAINED this to them very clearly. If you don’t have these honest conversations, you end up wiping so much crap in under your carpet that, as we see in sport and organisations, when you come under pressure, what happens to that pile under the carpet? It explodes!”

Perched on a couch in the central space of the spanking new Gardens International in Limerick’s city centre, Caroline Currid is one of two panellists speaking at Breaking the Mould, a special evening of frank panel discussion and chat, designed to inspire Limerick’s business community to work together in the promotion of Limerick as a city. She is speaking about her conversations with the Limerick senior hurlers. To her right, on a snazzy side table, stands the Liam MacCarthy Cup.

She has been involved in the backroom teams of four All-Ireland winners – Tyrone footballers (2008), Tipperary hurlers (2010), Dublin footballers (2011) and Limerick hurlers (2018). She has worked with world-class athletes including Lions’ captain Paul O’Connell, Kenya’s 800m Olympic champion, David Rudisha, as well as shadowing world-renowned organisations including the The New York City Police Department (NYPD).

In the region of 150 people have gathered this Thursday evening for the Breaking the Mould event which is the brainchild of three Limerick business players, Mazars, Collins McNicolas, and Sellors. In attendance are solicitors, advertising executives, retailers, bankers, lecturers and sports men and women, all seeking the keys that unlock success.

Over the next 50 minutes or so Caroline and fellow panellist Nathan Tenzer of Edwards Lifesciences (a company specialising in artificial heart valves) share some of the fundamentals which they feel leads to success. The panel is moderated by former secretary general at the Department of Finance, John Moran.

“The common fundamentals you see with high performing teams or organisations, and the six the Limerick hurlers embraced, were,” Caroline starts off.

First on the list, she explains, is having a “strong purpose” around what you do. Key to this is understanding everyone’s values and understanding the uniqueness of everyone “but bringing that together as one energy”.

“If you understand your purpose and why you are doing it, what is your game plan? What’s your process? What’s your strategy?” she goes on.

“Limerick hurling coach Paul Kinnerk is an extremely talented coach in this city and he put a great process in place but he got the players involved in it. A lot of organisations put a strong strategy in place but do they get the people involved? Paul was fantastic at doing that so the lads felt they had accountability - they had ownership over the game.”

The next fundamental for high performing cultures, we learn, is having high standards.

“If you let that slip the standard of the whole project slips,” says Caroline, which leads her to onto the next key in high performance, honest communication.

“Within sports teams and organisations sometimes we fear this honest conversation and just being honest in relation to what we are thinking and how we are feeling. I know it is easier in sport, you can drop a person of get rid of a person on a panel. It’s not as easy in organisations especially with HR and regulations.”

During her time with the Limerick hurlers - it was confirmed by LeaderSport last month that she won’t be part of John Kiely's set-up for 2019 - Caroline would do one-to- ones with every panel member about every six weeks.

“I suppose I was at the unique vantage point,” she explains. “Individually, I knew what was there too and they embraced the one-to-ones. I had a vantage point and I could probe it a bit in the group conversations until they got the courage themselves just to go after it.”

By the time the hurlers got to Championship 2018, there was no need for Caroline to be probing, “Declan (Hannon) and the lads were just having the conversations themselves and John wasn’t even needed.

“These lads know each other and they know what they’re at. I mightn’t get all the information nor would John but they all know what they are at. As I say, there are 168 hours away from training and what are you doing in them 168 hours to make you an effective Limerick hurler?

“And that’s what they started calling each other out on which was super. It was gold dust to us because we didn’t even know it was happening.

“You see it in sports teams - they’re cool as a breeze when there is no pressure on them and they get on great but the minute they come under pressure they go into individual mode because they have so much crap in underneath, they park it and haven’t dealt with it. I believe the lads had crap in under their carpet and we had to talk about it.”

The last piece of the jigsaw, she explains, is the unit - coming together.

“When people talk to me about the hurlers they say the one identity that really resonated with them was that they were doing it for each other - that Graeme Mulcahy and Cian Lynch and these guys were fighting for each other, they were not out there on that pitch individually and we did a huge amount of work in relation to that - making sure that it was one, that we were one unit, that we were one team.”

And how do you do that?

“The accountability is huge in relation to that - having meaningful conversations, valuing them as people. John Kiely is a phenomenal leader, he is a great man for valuing people and not just athletes.

“We spent a lot of time just talking about the challenges as young men and our vulnerabilities and not to be afraid to be vulnerable and they embraced that and took it on and it was a step by step process and when you do that you build massive rapport and trust within a team which then creates huge influence which then creates a huge performance. It just goes around in a circle then, you continue building the values and your process and you see the lads have continued that well-oiled machine which brought them that success a couple of weeks ago in the league as well.

“They are simple fundamentals there is no secret to it, it’s not rocket science, they are simple but they are very important in relation to embedding a high performance culture in the team.”

A question from the floor focuses on encountering resistance when trying to implement methods when you come into an organisation or sporting arena.

“So it takes time to build their trust and to try and explain to them the impact of it and going through the experience of it with them. I talk about being vulnerable and talking about themselves in front of each other - that was really hard. We began it at the beginning of 2017, you see the outcome of it at the end of 2018 but it took two years.

“ I think sometimes people think whether it be psychology or excellency or whatever part, it’s just in and out, but I was there for every week for two years with them lads to embed that psychology with them.