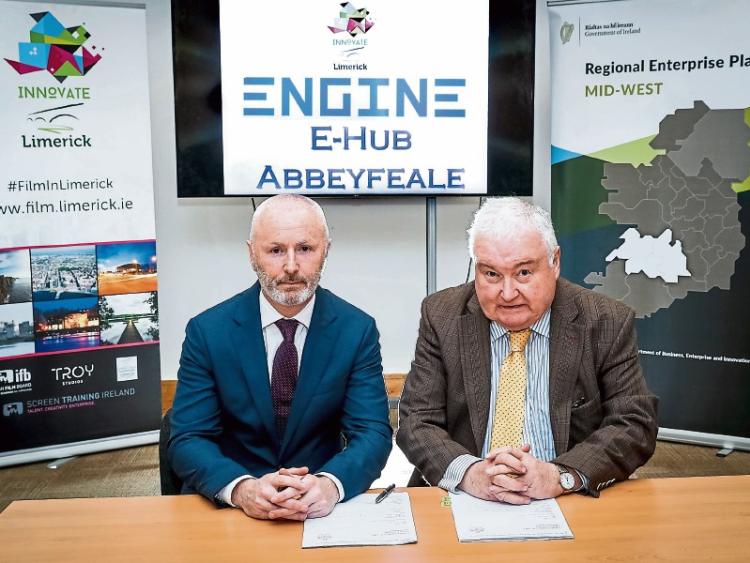 Prof Eamon Murphy, chairman Innovate Limerick with Cllr Seamus Browne at the signing of contracts for the new e-Hub building this week

THE plan to develop an e-Hub in Abbeyfeale took a significant step forward this week with the signing of contracts for a building on the town’s main street.

The  red-brick building, formerly a bank, has been bought by Innovate Limerick, the development  arm of the council and the expectation is that it will be up and running as an e-hub by early next year.

“This facility will create a pathway to sustainable employment in the town,” said local councillor Seamus Browne who is a board member of Innovate Limerick.  Welcoming this week’s development, he added: “The Abbeyfeale e-Hub will also benefit villages such as Athea, Mountcollins, Tournafulla and Broadford and there has been considerable interest from these areas in the E-Hub.”

Innovate Limerick’s vision for the building is that it will become a central community space with high speed broadband and fitted out as a co-working space and with meeting rooms and a training room to facilitate business start-ups and training.

The centre, Cllr Browne said, would support entrepreneurship and employment opportunities as well as retraining and up-skilling in the town and at every level in the local community.

Council deputy chief executive Pat Daly pointed out that the co-working space would have many benefits for businesses, including saving costs. It would also help create an environment that encourages creativity, better communication and collaboration between businesses and individuals, he said.

The chairman of Innovate Limerick, Prof Eamon Murphy said that the e-Hub in Abbeyfeale would be connected to the existing network of Enterprise Centres. “The facility will also be connected to “ENGINE” which is located in the heart of Limerick city centre’s Georgian Innovation District and ENGINE e-Hub at Rathkeale which will be launched in June of this year.”

ENGINE has been established to drive innovation forward, by providing individuals and companies with facilities to match their ambitions and needs, Prof Murphy explained, and  is home to entrepreneurs and companies who are focused on technology and innovation.

The training facilities at ENGINE Limerick have been developed to create a supply of skills needed across a range of sectors, for example, to meet the needs of the international film sector following the location of international film studios Troy Studios in Limerick.

“It’s our  vision to create the same supports and opportunities for Abbeyfeale and its hinterland at this facility,” Prof Murphy said.

Cllr Browne added: “The e-Hub site has a lot of potential and I will be pushing for an Incubation Hub to be developed on the site also”.