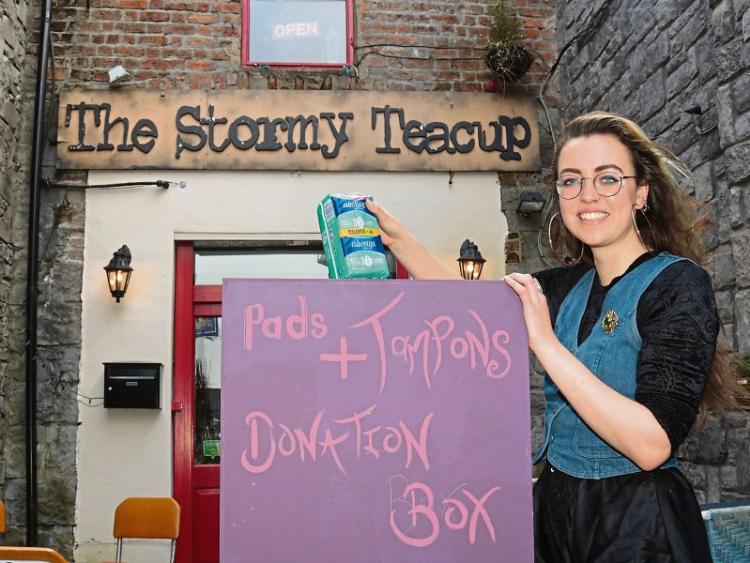 A ‘PADS and tampons’ donation box has been set up in the city centre to help homeless people and those experiencing period poverty.

Rion O’Donovan, a fourth year fashion design student at the Limerick School of Art and Design (LSAD), has launched the first dedicated drop off point in Limerick city for donating sanitary products for the homeless.

The donation box has been installed at the Stormy Teacup Cafe on Fox's Bow. “When you are already in a horrible situation like homelessness and then you get your period, that can be horrible,” Rion said.

She was inspired to launch the initiative after reading an interview with Homeless Period Ireland, who set up donation points around the country for pads and tampons.

While there are various donation initiatives underway in Limerick, like toiletry drives for those living in direct provision, this is the first drop-off point for sanitary products to be distributed to homeless shelters in the city centre.

“People have said to me that everytime they go to buy a box of tampons, they’ll buy a second one again and just drop it into the box in the Stormy Teacup,” Rion explained.

When she officially launched the project, the donation box was almost “full to the brim” thanks to the number of donations she received, she added.

Once a month, workers from the various homeless shelters make their way to the cafe to pick up boxes to be distributed.

Rion also provides homeless people in need with donations if they are embarrassed to approach the donation box.

All donations to the cause will go to “people who are really, really struggling”, she added.