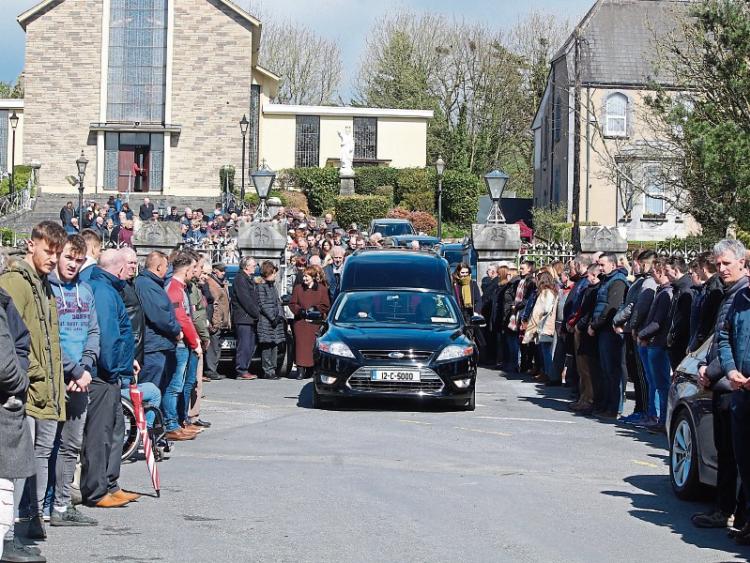 RICHIE English brought so much joy to the last months of his father’s life.

Paddy English got to see Richie win an All-Ireland medal; bring the Liam MacCarthy Cup to his hospital bed; receive an All-Star, and just hours before he passed away, watch Limerick claim a league title.

But, as Paddy looked down this Wednesday, he couldn't have been more proud at the eulogy his son gave at his funeral Mass in Doon Church. Richie joined with mum Marian, sister Lisa, extended family, neighbours, friends, Limerick hurlers, management and County Board officials to say a final farewell. Paddy's coffin was draped with the red and white colours of Doon GAA Club.

“It’s difficult to put everything you would like to say into a few words about Paddy. I’m trying to keep it short and brief but you could write a book on him,” said Richie. His father was diagnosed with MS in 1995 – 24 years ago.

“It was a tough life, battling illness for so much of his life. He never let this phase him. He maintained a positive outlook throughout,” said Richie to the congregation, many of whom could only find standing space outside. There has been huge sadness in the parish of Doon since news broke of Paddy’s passing on Monday morning. In a sad coincidence, Paddy’s brother Dick also died on April 1, in 1997.

Richie spoke of his 61-year-old father’s love of his family, hunting, farming, nature and, of course, the GAA.

“His hurling days were underrated as he said himself. He often said as a Junior B player that, ‘a good Junior B was better than a bad Senior’. When he finished playing he served as secretary and attended all matches – Doon and Oola. Every match under the sun he would go to up until last year. His love of hurling included following Limerick through thick and thin with his neighbours and friends.

“In his final years, going to matches was his greatest social outlet. He got to meet everybody he wanted. He was known up and down the country and the county for sitting in his wheelchair offering support from the sideline at hurling, football, camogie, ladies football matches. He never gave out about any player throughout his life,” said Richie.

One of the nicest stories after Limerick’s All-Ireland win was centred around a magic photo of Richie and Paddy with the Liam MacCarthy Cup in St John’s Hospital. It was a moment in time between father and son, captured forever.

“Last August, after five months in St John’s Hospital he made a recovery that was not expected which was helped by the events in Dublin on August 19. He was the first man in Limerick to get a personal visit from Liam MacCarthy thanks to the County Board on the Tuesday morning after the All-Ireland.

“The following day he came home from hospital and the following Monday he was the star attraction when the cup came to the GAA field. He didn’t leave that night ‘til about 11.30am – we couldn’t get him home!” said Richie, as everyone in Doon church smiled.

The teacher in Raheenagh NS – his pupils attended the funeral – spoke of his mother’s care and love for his father.

“I would like to thank the nurses and doctors in St John’s, UHL and Nenagh for all their care throughout his life; Dr O’Brien and the local homehelpers who kept his spirits so high throughout his life,” he concluded. Warm and heartfelt applause from the congregation rang out. It concluded a beautiful ceremony officiated by Doon parish priest, Fr Jimmy Donnelly with the assistance of Fr Tony Ryan, former Doon PP, Fr Loughlin Brennan, Fr John Morris and Fr John Keating.

Before the Mass commenced symbols of Paddy’s life were brought to the altar. A hurley to represent his love of GAA and Doon and Limerick; a token to show his fondness for cattle breeding, in particular Shorthorns, farming, land and animals; a book as Paddy was an avid reader and kept his mind active through crosswords and quizzes; a family photograph to show his love for his family and a picture of him hunting, another passion.

Fr Donnelly said: “Paddy was a gentleman who was deeply respected by all who had the privilege to know him.” The respect he was held was shown by the large attendance at the funeral and removal including Limerick GAA hurling sponsor JP McManus.

Under a leaden sky that occasionally parted to reveal sparkling blue, Paddy English was laid to rest in Doon, the place he lived all his life and held so dear.