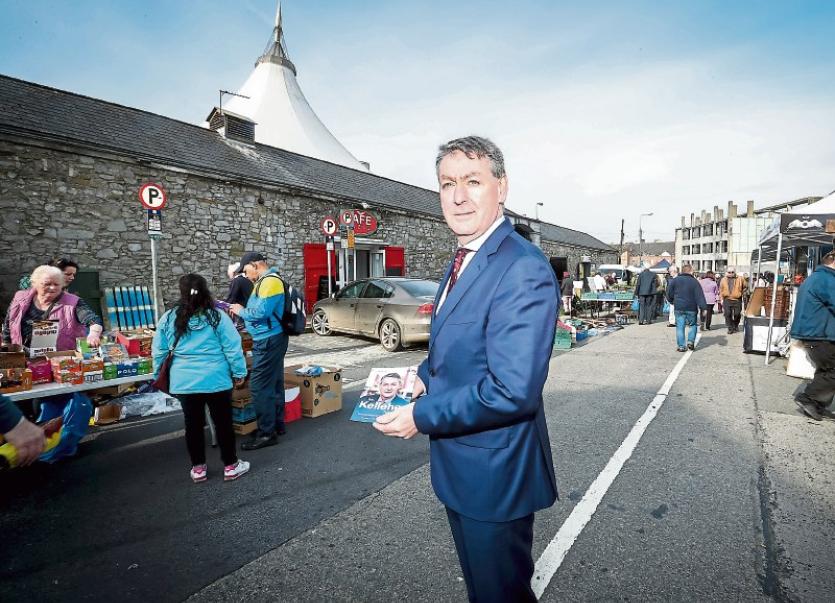 Billy Kelleher: Regional Spatial and Economic Strategy should be changed, "it makes no sense” as it is

And he hopes the Regional Spatial and Economic Strategy (Rses) – widely criticised locally for a perceived negative effect in Limerick – is changed, adding as it is, “it makes no sense”.

The Fianna Fail South election candidate was in Limerick on the canvass ahead of the polling day of May 24.

“There is no point in having this west coast development of Cork and Limerick if only one area is prospering, and the rest are suffering. That doesn’t make sense from my perspective and I think when you’re developing hospital facilities, investment in universities, investment in other infrastructure, prioritising IDA development, investment in airports, all these things have to be done with a view that the whole region should prosper. Any drag effect to Cork should be mitigated. You don’t want a situation as has happened in Dublin where you have everything in a defined area, where the rest of the area is struggling,” he said.

Mr Kelleher – who has served in Dail Eireann since 1997 – pointed out Limerick’s location with a healthy hinterland means it’s more ripe for development, unlike Cork which all it has beyond it “is the Atlantic Ocean”.

The frontbencher has pledged, if elected to the Brussels and Strasbourg parliaments, to open “a number of constituency offices” across the southern region.

But he also wants to see the European Union follow suit, opening “hub offices” to give the public a greater understanding of what it does.

Mr Kelleher, whose running mate is the Wexford councillor Malcolm Byrne, is following somewhat in the footsteps of outgoing MEP Brian Crowley.

Health issues have forced him to retire from public life after 25 years in the European parliament. He was the perennial polltopper, even in tough electoral times for Fianna Fail.

“A colossus in electoral ability,” is how Mr Kelleher describes him.

“But he was also a colossus in Europe, and I saw that first-hand, when I was over there as a Minister of State at [European] council meetings. The influence he had, and it wasn’t just influence in the context of the parliament, the influence he had here also allowed him to influence the commission. He was always just a phone call away, and worked that ability he had to connect with people in a very positive way. In terms of trying to follow him – if I was able to get on that pathway, that’d be something I’d set out to do.”

Connections between Limerick and the 2019 band of European hopefuls are thin on the ground – but Mr Kelleher did attend agricultural college in Pallaskenry.

“I have great memories of it being truthful. I have memories of being in Limerick city when I should have been out in Pallaskenry in the college! But we enjoyed it, there were good sporting facilities there. We were doing what we liked, we were young men. I remember the The Coach Inn in Kildimo, and a few nightclubs in West Limerick. But it was a great year of freedom for me,” he said.

As a Cork man from a GAA vintage, he also believes coming to Limerick was his first introduction to rugby.

If Mr Kelleher is the final person to be elected in Ireland South – the sprawling constituency stretching from Cork up to Wicklow – he will remain in the Dail until the formalities surrounding Brexit are completed. The fact Britain has not concluded this almost three years after the referendum “shows the ineffectiveness of politics in the UK”, he added.