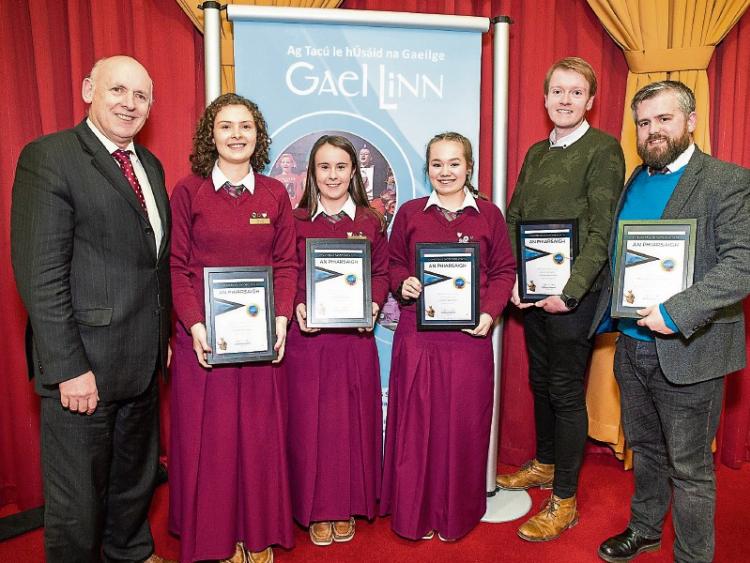 The senior debating team from Laurel Hill Secondary School were runners-up at the All-Ireland Final of the Gael Linn debating competition, Comórtas Díospóireachta an Phiarsaigh 2019.

The event took place in the Lucan Spa Hotel on Wednesday last and was the culmination of this year’s competition, organised annually by Gael Linn, with funding from Foras na Gaeilge, for second level schools nationwide, in which over 150 schools have taken part since October last.

The topic for debate in the senior section of the competition was particularly appropriate for this age group – ‘Ba cheart an aois vótála in Éirinn a ísliú ó 18 go 16 ! (The voting age in Ireland should be reduced from 18 to 16! )

The young orators were well-informed on the topic, and put their respective arguments across to the large audience comprehensively.

! There were five adjudicators on the panel – Seán Mac Labhraí, Máirín Uí Mhuirí, Áine Máire Ní Ghioballáin, Fergus Ó Conghaile and Antóin Delap, and the standard of debating was so high, that they took some time in coming to their decision.

The Laurel Hill girls did their teacher, James Kelly, and their school, proud on the day, but were pipped at the post by the team from Kilkenny College. As the saying goes, ‘Beidh lá eile ag an bPaorach!’