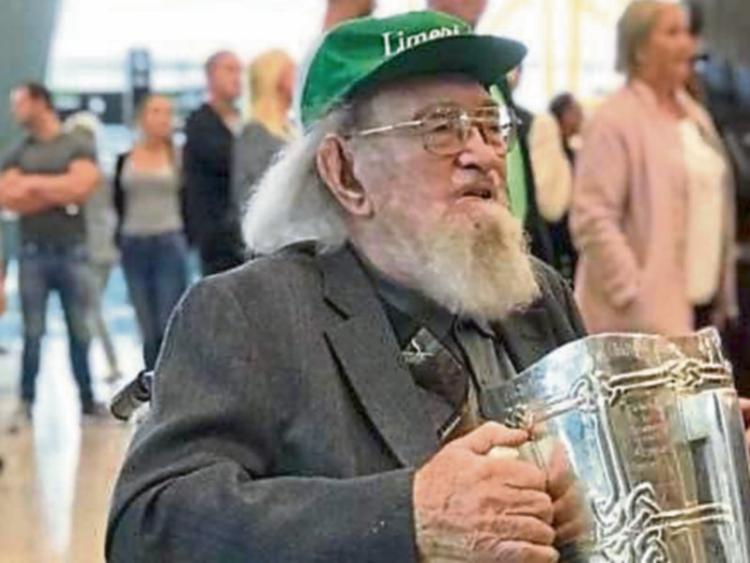 A 98-YEAR old ‘true GAA legend’, who delighted Limerick fans with his enthusiasm for his county when the senior hurlers took home the Liam MacCarthy Cup last August, has sadly passed away.

John Hunt, a native of Athea, County Limerick, travelled almost 6,000 km from Chicago to watch his beloved Limerick take on Galway in the All Ireland Senior Hurling Final last August.

With deep sadness we regret to inform you of the passing of a true GAA legend, John Hunt. We extend our sincerest and deepest sympathies to his entire family and friends on their great loss. May he Rest In Peace https://t.co/HcjP0pfWxI

“One of his dreams come true last August when he travelled back to Ireland to watch his native Limerick win the Liam MacCarthy Cup after a 45 year wait,” the Limerick Hurling Club in Chicago said.

Mr Hunt was one of the founding members of the GAA club and he was named as the first chairman of the club in 1959.

“John will never be forgotten in The Chicago Limerick Hurling Club. You are in our thoughts and prayers,” the club said.

Following the All Ireland Final, John Hunt welcomed the team back to Limerick from the front of Colbert Station when the victorious hurlers were welcomed home to the city after their win.

An elated Mr Hunt also went on to steal the show on the RTÉ Late Late Show, when he was given the chance to lift the Liam MacCarthy Cup after a 45-year wait.

“As far as I’m concerned, the way I feel now, everyone of those players should go straight to heaven,” John said. .