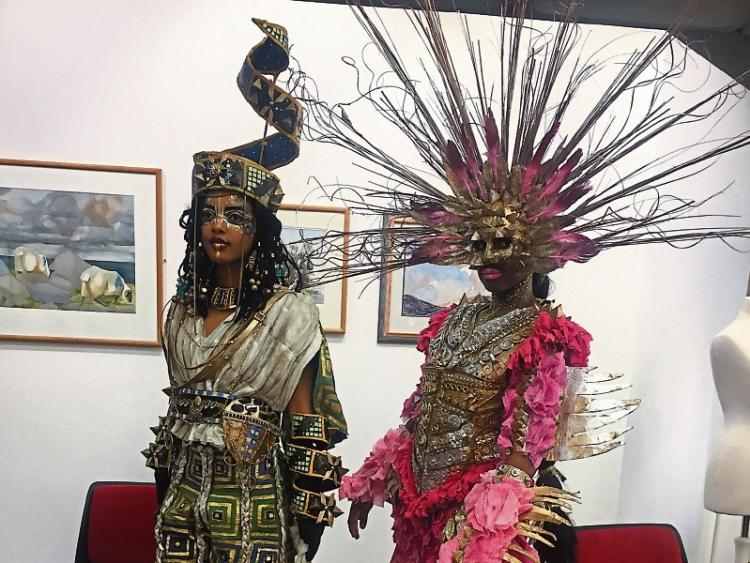 Students at Coláiste Nano Nagle, on Sexton Street, are through to the national finals of Junk Kouture, an all-island competition that challenges secondary school students to turn everyday waste materials into original works of couture.

“Both teachers worked collaboratively to unleash the full potential of the girls.

“We are now really looking forward to supporting the girls in the grand finals,” she added.

Romeing the Nile, which uses disposable towels and wipes to question our throwaway society, was created by students Abbie O’Keeffe, Lauren Kelly and Feruza Rameto.

The group was inspired by the destructive nature such disposable materials have on the earth and its inhabitants, while paying tribute to the art, architecture and sculpture of ancient civilisations that worshipped the earth.

Wipe Out, inspired by the waste products left behind by using face and baby wipes, was created by student designers Nancy Ekhator, Leah Cosgrave and Nikoletta Kosma.

Fashion designer Olivier Rousteing and Beyonce were the main inspiration for their piece, which also used a collection of hard materials like bolts and jewellery to give the piece an armoire effect.

Now in its ninth year, Junk Kouture blends together fashion, design, engineering and sustainability into a creative contest for students. At the Southern regional finals, held at the University Concert Hall Limerick, 1,500 entries were whittled down to 85 designs to progress to the national finals in May.

A design created from 300 milk cartons cut, tessellated and connected together was crowned the overall winner of the competition last year.

The Bank of Ireland Junk Kouture Grand Final takes place on May 2 at the 3Arena. More info can be found on boijunkkouture.com