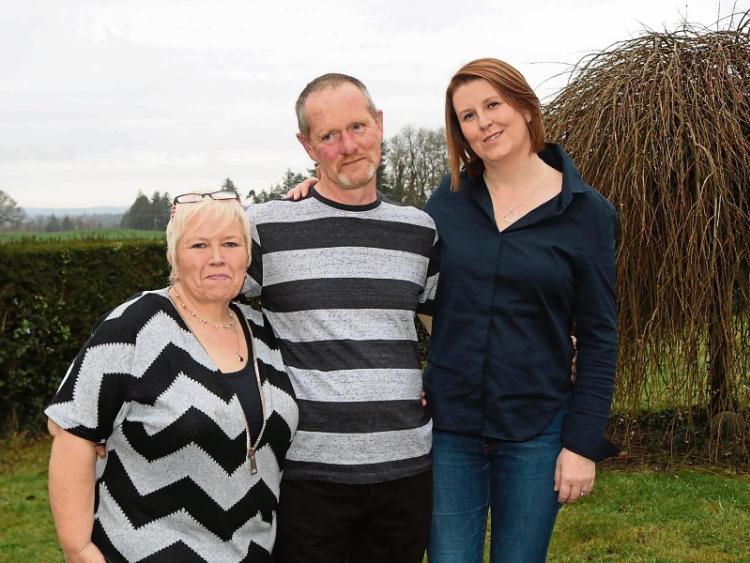 ALL the stars aligned to save the life of Murroe man Johnny Davis after he suffered a cardiac arrest.

Aoife McGivney, a nurse in Dublin, saved a bus driver's life on O'Connell Bridge this week after he collapsed at the wheel. But Johnny, who works in the farm at Glenstal Abbey, fell to the ground in the much more rural location of Abington, Murroe.

“It was 10.30am. I was sweeping leaves and then I was talking to a neighbour, Mike Holmes – that’s all I remember. Weeks later, he told me I just started to fall back. I was gone.

“Mike ran out on to the road, near Power’s pub, and the first car he stopped was a nurse (Lynda O Duinn). She never travels that road. He waved the car down. Lynda told me afterwards she saw the fear in his eyes. She started giving me CPR. Only for her knowing what to do...” said Johnny, who is married to Margaret and they have two sons, Adrian and Gavin.

The 55-year-old said another kind-hearted lady, Carmel Lynch from Cappamore, stopped to give her assistance. Then PJ Holmes, who owns the Spar in Murroe, pulled in.

“PJ  doesn’t usually travel that road either. He saw what was going on and went straight to Murroe and got the defibrillator. Normally it is locked but it was open so there was no delay in bringing it straight back,” said Johnny. While all this was going on Lynda kept doing chest compressions. He said her hands were so sore the next day that she couldn’t change the gears in her car. Lynda used the defibrillator brought by PJ.

“I was gone. She brought me back. She saved my life. When the ambulance came within 20 minutes there was signs of life. I wouldn’t be alive today only for Lynda, PJ, Mike and Carmel. Everything slotted into place. Everybody was in the right place at the right time,” said Johnny. But he mighn’t have been in the right place.

“I was going to drive down a corner post up the fields in Glenstal before going to Abington. I don’t know why I changed my mind. If I had done that I was gone because I wouldn’t have been found.  According to the staff in UHL, there is a 5% per cent chance of a person surviving a cardiac arrest outside of a hospital,” said Johnny, who thanked everyone who came to his aid, the community for rallying around and the monks who were very good to him while he was out sick . He got three stents inserted, is back to full health and has had the opportunity to meet Lynda since it happened in October.

The stay at home mum-of-three downplays her training as a nurse in the Mater and post grad in emergency nursing because it is 19 years since she worked in a clinical setting of any kind. She says CPR and using a defibrillator are skills that “anyone can learn”.

Originally from Drogheda, Lynda moved to Limerick about 14 years ago. She says it was only the second time she has driven on that road. Both occasions were to see her children play a GAA match.

After heeding Mike Holmes’ call for help, Lynda said Johnny had no pulse and his breathing had stopped.

“It was the loneliest experience, lying in the middle of the road and someone pumping on your chest. Some lovely bystanders stopped, they were a phenomenal support to me. Then out of the blue a defibrillator popped up beside me.

“He was shocked three times in my company and he started making efforts to try and breathe while his heart was trying to start to re-beat. And then two lovely female paramedics came after 20 minutes. You could see that he had a heartbeat and a pulse. It was the best feeling in the world,” said Lynda.

She and Johnny have kept in touch since and there are two vital things that they would like to get across from sharing their story.

“Learn CPR. It's a simple and effective life saving skill. It is the first thing, after calling for help, to do in a cardiac arrest. The defibrillator is the second piece of the puzzle.

“It's also perfect timing to share this message as the Irish Heart Foundation is launching a new major initiative where they are aiming to train 100,000 people in communities across Ireland in CPR for free over the next two years. It's called Hands for Life and more information can be found at irishheart.ie” said Lynda. Secondly, she says people should find out where their community defibrillators are located and how to access them.

“You need CPR to pump blood to the brain and all the major organs. The defibrillator is definitely a game changer in terms of getting the heart started again to a normal rhythm,” said Lynda.