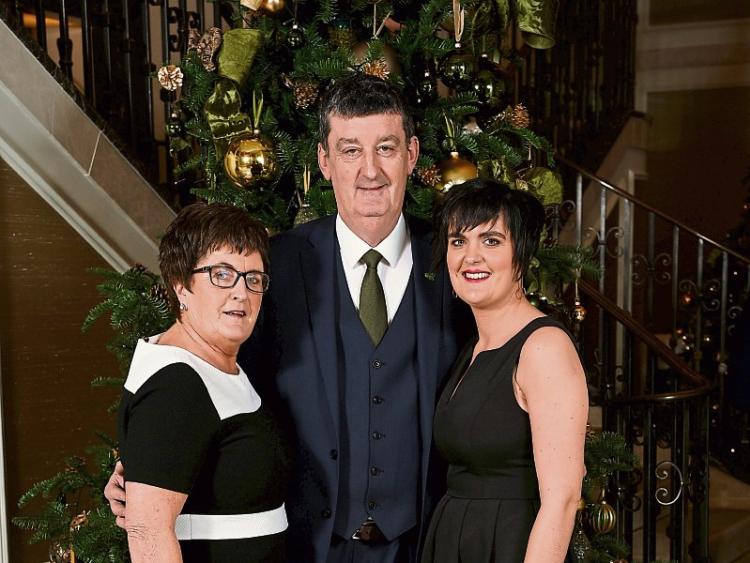 Mary Cregan with her parents Patsy and John

“SHE is an exceptional young woman. We are all very, very proud of her.”

It was a heart-stopping moment as John Cregan, chairman of Limerick GAA County Board paid tribute to his daughter Mary, now receiving palliative care.

It should have been Mary’s night, he explained, the launch of a fundraising event that she had organised to support four charities that had helped her through her cancer diagnosis.

“The intention was that Mary would be here to speak,” he said. But for the past couple of weeks, he told the capacity gathering, she had been receiving palliative care in her own home, thanks to Milford Care Centre and the Daffodil Nurses who were “absolutely fantastic”.

Their care, he said, was a great consolation to the family who hail from Dromcollogher-Broadford.

Mary, he continued, had faced her cancer with tremendous courage and positivity. “Despite her illness, she was always looking out for others. She has been helping people all her life. With Mary, it was never about herself. And she has done that all her life.”

Mary was diagnosed with a brain tumour in 2015 when she was just 30 years of age and received extensive treatment. Unfortunately, the tumour returned last year.

Mary, John continued,  had put “all her focus and dedication” into ensuring that her idea of the Help Fight the Big C fundraiser would be a success.

“She set out with a modest target,” he added. “It appears to me now, from what I am hearing, this fund-raiser looks set to break records and that is very encouraging for all of us.”

John paid tribute to the two people, Jim Barry and Eileen Kelly, who had taken on the role of organising the event on Mary’s behalf. And he thanked all those who attended the launch, who bought tickets or donated to the auction.

Earlier, Limerick senior hurling manager John Kiely, said it was a great honour to officially launch the fund-raiser which will take place in the Devon Inn Hotel on Friday, March 15. “There is going to be a fantastic turn-out on the night,” he predicted. “Every one of our families has been touched by cancer.”

“It is an amazing gift to help people,” he continued, recalling a visit by Fr Peter McVerry  to his school where the activist for homelessness spoke about the gift of giving and the value of the gift of giving. “It struck a chord with me. There is probably nothing greater than the gift of giving.” And people will have the opportunity to give on March 15.

John Kiely also spoke of the legacy of Limerick’s historic hurling win. “It brought a great sense of togetherness and community,” he said. That same sense of belonging and support was at the heart of the fundraiser, he pointed out.

“This is one of those fund-raisers where people don’t mind being asked,” he said. “That is what it is about. We stick together. We support each other.”

Tickets for  Help Fight the Big C cost €10 and the night begins the Devon Inn Hotel at 9pm with music by Paddy Quilligan, the Liam O’Connor Show  and an auction with eleven very valuable items for sale, followed by a disco. There will also be a raffle on the night.

The four charities that will receive funding are the Brain Tumour Association of Ireland, Brú Columbanus which provides accommodation for the families of patients at University Hospital Cork; ACT,the Aid Cancer Treatment organisation which works to improve quality of life for cancer patients and BHOC, the Bandon Hyperbaric Oxygen Centre. BHOC has oxygen chambers which give patients large doses of oxygen which helps promote healing. Representatives from the charities who attended the launch explained the work of their organisations.

Speaking to the Limerick Leader a number of weeks ago, Mary explained why she took on the task. “ I was lucky enough to have the support of many amazing charities,” she said. “Unfortunately nobody knows when cancer is going to knock on their door, but it brings amazing comfort to know that there are so many fantastic charities and organizations out there that go above and  beyond every day to help people like me. These same organizations and charities would not be possible without fundraising, which is why I am doing something to give back.”

At Monday’s launch, John Cregan said they hoped to acknowledge the Milford Care Centre and the Irish Cancer Society as well.

A go-fund me page is also in place and has already raised almost €10,000. Go to https://www.gofundme.com/6pddoeo.