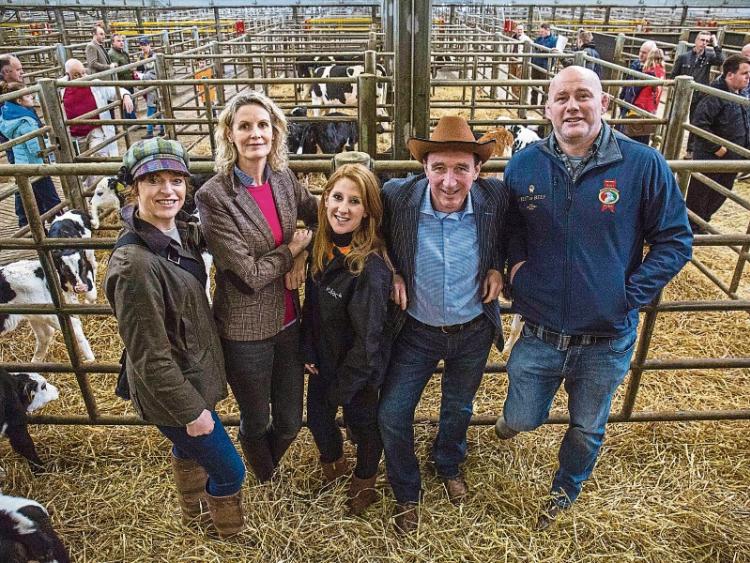 AN AGRI charity auction took place in Fermoy on Saturday but it had a distinctly Limerick feel to it. It was part of Rearing To Go’s campaign to create awareness around mental health and mental wellbeing,

Peter Cagney, from Ballingarry, donated a calf while Salesian Agricultural College gave a maiden heifer by FR2339 out of the dam of Pallaskenry Premier. At €1,450 it was the highest price on the day in Corrin Mart. All monies raised will go to Teac Tom which supports individuals and their families affected by suicide or contemplating suicide.

Two of the celebrity auctioneers were rugby legend John Hayes and his wife, Fiona Steed - no stranger to speaking to large audiences in her role as a rugby analyst. And it turns out that Peter Hynes, who along with his wife Paula are the main drivers of Rearing to Go, is a Limerick man.

“I grew up in Crecora and went to school in St Munchin’s. I was living in Limerick from the age of 2  to 19,” said Peter. He said Fiona and John got on brilliantly.

“Fiona is an absolute dream. I think she thoroughly enjoyed being up on the rostrum and was very good at it.  John got on mighty well too. He is great craic and he was great with the kids too. They are real genuine people,” said Peter.

John also put his hand in his own pocket.

“I said to John before the auction, ‘Are you buying?’ He started laughing and said there is hardly a red and white Hereford and I said now that you mention it! It was one we donated. He is a nice calf. John gave €420 which was a great price. I think they will have fun with it as a family,” said Peter. He and his wife gave three out of the 29 calves.

“If you won’t support it yourself you can’t expect others to,” said Peter. Big money was raised on the day and in the run-up

The Rearing To Go campaign is very generously being supported by Volac, Dairygold Co-op and Cork Marts.

Peter said they want people to know that if someone is feeling under pressure there is help available. Just as one example, they are looking for a farmer that is farming by themselves and is having a real tough time with calf scour at the moment.

“When that hits a farm during calving it can be heartbreaking. We want to give him three buckets of Milkshake C-Guard for free. No one will ever know who they are. We don’t want a photograph or anything like that. We just want to turn around to a guy who is going through a tough time at the minute and say, keep the chin up. Send us a DM on Twitter,” said Peter.