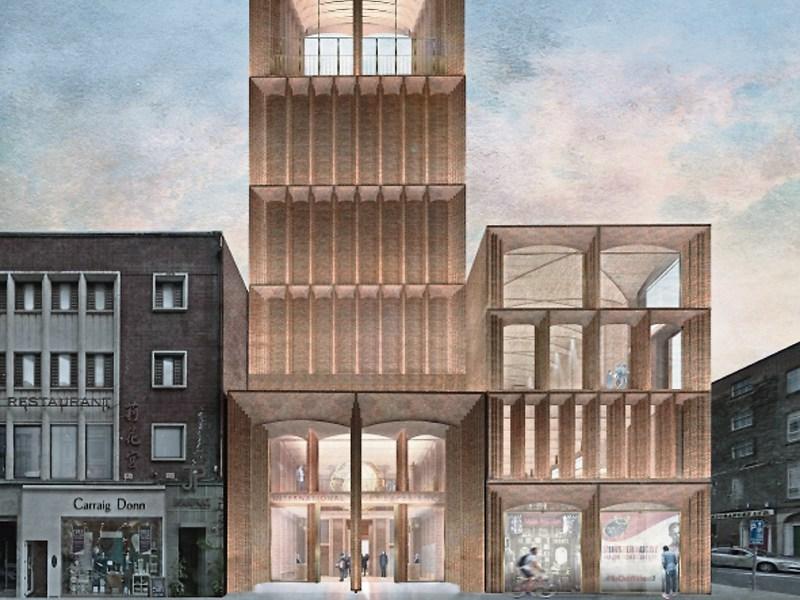 A new impression of the International Rugby Experience, which has been designed by top architects Niall McLaughlin

WORK is set to be begin on the much-anticipated International Rugby Experience in Limerick in the coming weeks.

The Limerick Leader can this week reveal new architect’s impressions of the multi-million euro development to be located on the heart of O’Connell Street.

It comes after council planners cleared the way for the amended version of the development – a move which will see Fine’s Jewellers incorporated and demolition work begin on O’Connell and Cecil streets.

The Limerick Leader can also this week reveal that leading exhibition design group Event Communications London, who were involved in the Titanic visitor centre in Belfast, along with the National Army Museum in London and the touring Meet Vincent Van Gogh Experience, have won the contract to work on the Limerick rugby project.

It will be a family attraction that will last about 90 minutes with a number of digital galleries looking at great moments in rugby, players, teams, history and much more.

There will be civic spaces and meeting rooms to allow local groups and organisations run events. The reason the site was chosen in the heart of the city was to “help bring life and regeneration” to the city centre.

It is hoped the project, designed by top architects Niall McLaughlin, will be completed by early 2021 and there is confidence that the early targets of 100,000 visitors a year will be comfortably met.

The museum had originally received permission from An Bord Pleanala last year.

But early in 2019, the fresh proposals were revealed.

There will be a seven-storey building with a two-storey portico fronting O’Connell Street and a two-storey block to the rear.

Inside, the development will see a “multi-media visitor experience, exhibition and education space” plus retail and cafe at ground floor levels. One hundred jobs are set to be created as a result of the new development.

He said: “Limerick needs tourists. Projects like the rugby museum will bring much-needed footfall to the city centre.”

Metropolitan mayor, Cllr Daniel Butler added: “I am delighted to be able welcome this decision. The city centre continues to have serious challenges largely driven by issues surrounding footfall. The International Rugby Museum will add a new unique attraction into our City centre and offer people a new experience driving footfall. Huge credit goes to all involved in this project who persisted with it despite the challenges it faced that created costs which, may have jeopardised the museum.”

Planning was granted for the expanded works last Thursday, February 28. It is understood that the work will take about 18 months to complete.

While there will be some disruption during construction, no traffic lanes will be lost on O’Connell Street, it is understood.