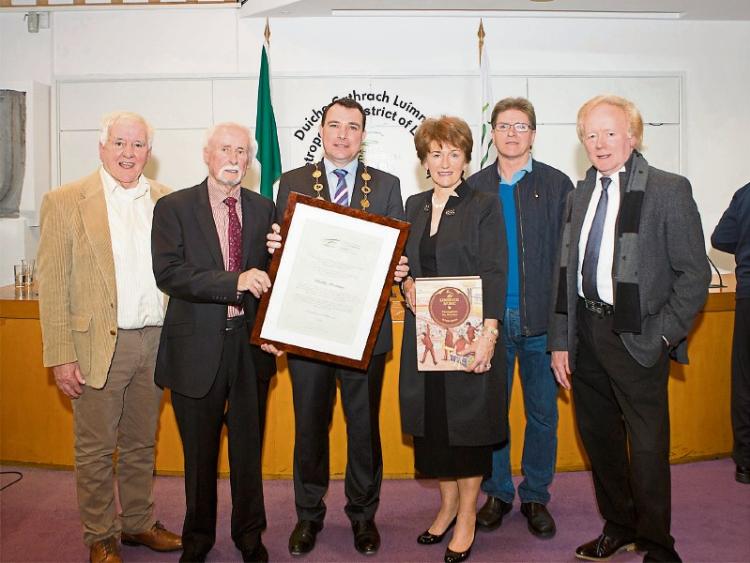 HISTORIAN and Limerick rock-and-roll fanatic Paddy Brennan's book which got the seal of approval from President Michael D Higgins has been honoured with a Mayoral reception.

A former Limerick Person of the Month winner, the Corbally man, originally from the Hyde Road, last year published a massive book chronicling the city and county’s music scene over more than two centuries.

Mayor Collins described the piece as a “labour of love”, suggesting Paddy had been working on the opus for 30 years, rather than the three he admitted to!

The 556-page publication contains 1,400 photographs, and the sounds of Shannonside are also included in a special compact disc.

“I was blown away in Thomond Park at the launch,” the mayor admitted. “The book is in my office. When I have a coffee and take a break for five minutes, I take out the book and flick through it. Then you realise you’ve gone from one page to the next and 20 minutes has gone, and you need to go back to work! You get really engrossed in it.”

He said Limerick is unique to have this tome, adding: “No city in the world has a book like this. I think the reason for this is the fact there are very few cities in the world that have a musical history like Limerick has. It takes someone very special like Paddy to put it together. It really was a labour of love. He said it took him three years to put together. I have a suspicion he was probably planning it for nearer on 30 years! Paddy’s love of music really shines through in this piece of work.”

Mayor Collins pointed out that there are not too many books from Limerick authors which contain a foreword from President Michael D Higgins.

“It just shows he is a man who is very interested in arts and culture. This musical history of Limerick can live on now into the future. It's fantastic Paddy has compiled it, but it's fantastic for Limerick we have it. There aren't too many books in Limerick which have a foreword from the President of Ireland,” the mayor added.

Speaking at his reception, Paddy asked whether he might be the first person from the Hyde Road to be afforded a mayoral reception.​

“We’re a long way from the Hyde Road, I can tell you! But I appreciate this gesture so much,” he said, sitting alongside wife Geraldine.

“This book has gone all over the world. It's gone to the Congress in Washington. I'm delighted so many people have seen this book,” he added.

Many of Paddy’s friends and supporters were present at City Hall for the reception, including Denis Allen – famous, of course for writing Limerick, You’re a Lady, which marks its 40th anniversary this year.

Tommy Drennan and John Daly were also present – the latter describing Paddy as a “special human being”. Tributes to the writer also came from metropolitan district councillors Marian Hurley and John Costelloe.