Bread not profits: Limerick Soviet centenary to be commemorated in major new play 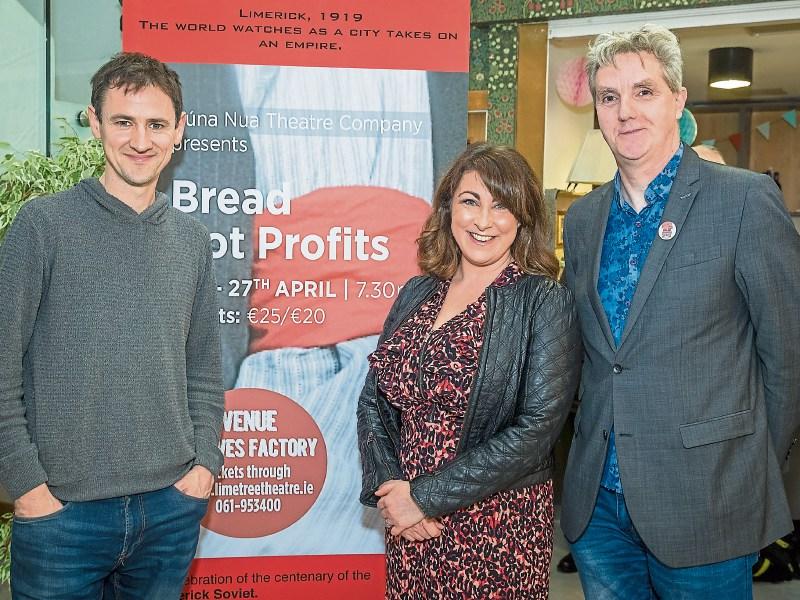 At the launch of Bread not Profits, musician David Blake, one of the cast members Georgina Miller and playwright Mike Finn Picture: Keith Wiseman

A MAJOR new play is to take place in the old Cleeves factory next month to commemorate the centenary of the Limerick Soviet.

Back in April 1919, the Limerick Soviet saw a city-wide strike against the might of the British Empire.

A 14,000 strong workers army, armed with just a printing press ensured access points to Limerick were cut off, leading to food shortages, and eventually the issuing of the own tender, the Soviet shilling.

The event garnered international media attention at the time.

Now, as part of a month of celebrations of the 100th anniversary, celebrated local playwright Mike Finn has teamed up with the Belltable, Guna Nua Theatre Company, the Arts Council – which has given out its largest ever grant to a Limerick production – and the University of Limerick for Bread not Profits, a major play running from April 17 to 27.

Some 11 actors – including familiar faces and new performers – will be joined by three musicians and a community ensemble, who will bring the events of April 1919 to life through what has been described as an “immersive experience”.

Speaking to reporters at a launch event this week in the Belltable, Mike said: “It’s something I’ve been interested in for the longest time. It’s a fascinating story, a remarkable story. It’s completely unique – nowhere in the world did this happen, where workers took over the city and ran it for the bones of two weeks like clockwork.

“I can’t wait to get this on the floor, to get it into Cleeves and to get it going. It’s going to be spectacular,” he added.

Check out some of the photos the launch of #BreadNotProfits at @BelltableLimk last night.

This immersive and ambitious piece of theatre will celebrate Limerick Soviet 100 at Cleeves Factory from 16th-27th April.

Historian ​Liam Cahill, the foremost authority on the Limerick Soviet, was on hand to launch the play.

He said: “Mike has brought not only all his experience and talent to bear on this, but also his strong personal political commitment. He will bring us a production that will astonish, educate and inspire us, and one which we will above all, enjoy.”

Tickets for the play are available from the Lime Tree Theatre Box Office on www.limetreetheatre.ie or by phone through box office on 061 953400.