Limerick Twenty Thirty is figuring out an ambitious blueprint for success 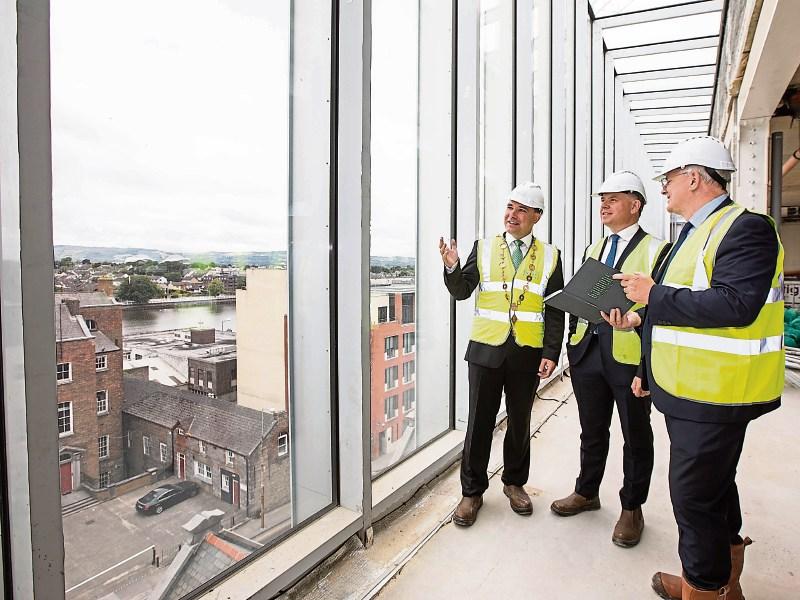 IT WAS not that long ago when people passed down Henry Street, that thoroughfare of great promise, and noticed the “skeletal shell” of the empty, unfinished Hanging Gardens site, as it was then called.

Now the state-of-the-art €18m Gardens International office facility is ready for take-off in the coming weeks, with Nordic Aviation as the lead tenant on the transformative site.

It is the first major instalment in Limerick Twenty Thirty’s blueprint for a thriving metropolis located in the Mid-West region.

Limerick Twenty Thirty DAC was established in the autumn of 2016, and ever since, the goal has been to pump €500m into strategic commercial, residential and infrastructural projects in a bid to generate thousands of jobs through investment.

And a decade after the dark days of recessionary times and economic downturn, the city and county is now “taking control of its destiny”.

That is according to David Conway, Limerick Twenty Thirty’s CEO, and he is responsible for overseeing the delivery of the ambitious projects that are in the pipeline over the next 11 years. Mr Conway said that the completion of Gardens International is a “pivotal and hugely exciting moment for, not just Limerick Twenty Thirty, but Limerick and the wider region”.

At the time of the organisation’s launch, “there was still a sense, in some quarters, of ‘would it really happen’, but it has and it is happening at pace”.

He said that Gardens’ “skeletal shell” was “an ever present and large reminder in our city centre of the downturn”.

“Today, it represents all that’s best about the future because we’ve made a real statement with it. We have built something to the very top global standards. The quality of finish is at a top international standard, known as LEED Gold,” he said.

LEED means “leadership in energy and environmental design” and is a building framework that is recognised globally. A “gold development” is among the top on an international level.

Mr Conway said this is the level that you would only typically see in top international cities.

“There is no office block in this city or region like it. In fact, very few are even built to this standard in Dublin,” he told the Limerick Leader.

“LEED Gold is a sustainability standard so our building achieves the most environmentally sustainable levels you get in the world. That in turn, means comfort and style. But, as people may know from their own homes, developing to the top environmental standards requires a big investment.

“We’ve done that and the good news is that we have a sparkling facility that sets a new standard for Limerick, is turning heads, will be full and, very importantly, has been developed on budget,” Mr Conway added.

The Twenty Thirty CEO said the €18m site makes a statement about Limerick that has emerged over the years, describing it as a “city with an ambition and capacity to compete on an international stage”.

“It’s the standard we are going to apply at the Project Opera site development and every other site. We are building the best because we know that’s the standard that will attract inward investment. If you fall short of that, you won’t compete at the highest level and that’s where we want to be,” he explained.

Project Opera is Limerick Twenty Thirty’s flagship project, which is expected to be four times, if not more, the size of Gardens International, but built with “the same high standards”.

Described as the “most important” development in Twenty Thirty’s masterplan, Project Opera will be starting its planning process with An Bord Pleanala “very shortly”.

“It will be a new benchmark for not just Limerick but for cities outside the capital and, indeed, will rival any development project in Dublin in terms of standard and impact,” outlined Mr Conway.

The 1.62 hectare site will be developed at a cost of €180m and has been fully-funded thanks to €170m funding from the European Investment Bank and the Council of Europe Development Bank loans.

“We expect that up to 3,000 people will work on the campus once its completed and there will also be a residential element. During the day it will be a major employment hub, but at night  it will be a bustling destination complete with restaurants, bars and open entertainment spaces,” explained the CEO.

“The design will also be entirely complementary to and protect important Georgian architecture on the site and the project will be built across a six year period. Opera will be the biggest single catalyst for growth that Limerick has experienced and all strands of society will benefit,” Mr Conway said.

Limerick Twenty Thirty’s sights have also been set on the 10-acre Cleeves site at North Circular Road and O’Callaghan Strand. Mr Conway and his team are currently scoping out their options for the site and “will move on then to master planning the site”, which is suited to mixed uses, including tourism, residential, educational, innovation and commercial.

He said it is a “wonderful riverside campus with huge potential”.

Mr Conway said 2019 will be the most significant year in terms of activity, having opened Gardens International, advanced planning for the Mungret residential project, planning Project Opera, and conceptualising Cleeves’ future.

But, he added, every year Limerick Twenty Thirty is making “equally important” gains.

“Our first year was really only a half year but it was about getting the team in place and advancing our first major project, Gardens. 2017 was about getting Gardens underway and beginning to move on Opera, last year was about pretty much building out Gardens, making significant advances with Opera and Mungret. So each year has been equally important; we just keep the momentum going.”

Asked what Limerick’s unique selling point has been since resurrecting from the economic crash, he said that Limerick is a “a city and county that is taking control of its own destiny, not waiting for anyone to do it for us”.

“That has come about largely thanks to a collective and cohesive approach by all key stakeholders; everyone rowing in the same direction. I don’t believe that level of cohesion and planning is happening at the same level anywhere else and its reaping dividends, to a level that other cities and regions are looking to replicate what we are doing.”

Gardens International is expected to open its doors for the first time in March 2019.

- This article was included as part of a 36 page supplement called Limerick On The Up, highlighting Limerick’s resurgence. It is available as an e-paper here.