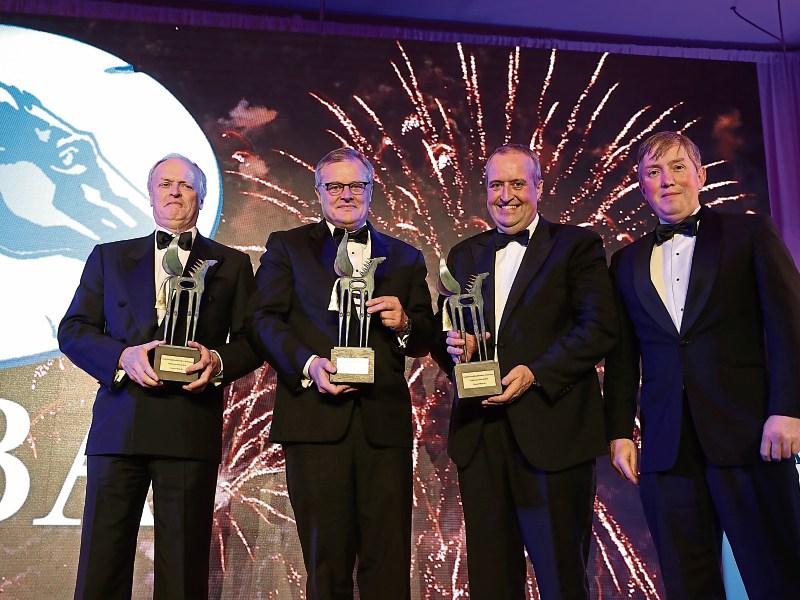 THREE County Limerick brothers have risen to the top of their chosen field.

Liam, Garrett and Brian O’Rourke, from Hospital, were honoured at the Irish Thoroughbred Breeders Association national breeding and racing awards ceremony in The Heritage, County Laois. The Wild Geese award went to the O’Rourkes for “individually and collectively flying the Irish flag with pride on the global bloodstock stage over many decades”.

Liam, the eldest, is director of studs, stallions and breeding at the Godolphin owned Darley Dalham Hall Stud in Newmarket. Garrett is general manager of Khalid Abdullah’s Juddmonte Farms in Lexington, Kentucky. While Brian manages Copgrove Hall Stud in Yorkshire.

Along with their sister, Fiona, solicitor, they are the children of Frances and the late Willie O’Rourke, a veterinary surgeon in Hospital and managing director of Tattersalls Ireland. He passed away in 1993.

Frances recalls that racing legend Michael Osborne told her husband that their young sons were gifted with horses and that they should follow a career in the industry.

“Willie told me and I said, ‘Horses, will you go away from me! I don’t want to hear about it’,” she laughed. In hindsight, the proud mum said they would never have been happy doing anything else.

“They are good lads, they have a great work ethic. They got the love of horses from Willie. He was in veterinary practice in Hospital until 1974. We used to breed, we had a few mares, not very many. The boys loved it. They were messing about with ponies as well. It was never going to be anything else that they were going to do,” said Frances, who attended the ceremony.

“It was a marvelous night. It was a lovely family reunion. The boys are very good to me. They are very humble. They haven’t forgotten their roots in County Limerick,” said Frances, who resides in Hospital.

On behalf of his brothers, Liam said it was “a great honour, a great privilege and a humbling one for us all”. “We were very proud to be chosen and had a great evening,” said Liam.

Frances gives all the credit to Willie for imbuing a love of all things equine but Liam says she was just as important. Frances worked on reception in Tattersalls Ireland.

“He was a great influence on all our careers but so was our mum. Our parents were great in equal measure and encouraged us. They didn’t stand in our way when they could see we had a vocation of sorts for the industry. My father, besides being a vet, had a small farm with a brood mares. We grew up with it and hence our interest was born.

“We’ve been very fortunate. We’ve worked with great people and had great employers as well. We have a huge amount to be thankful for. We have had a lot of luck, one creates luck to an extent. We’re very blessed to have the award,” said Liam.

Coincidentally, the brothers were presented with the Wild Geese award by a fellow Limerick man - Eamon Moloney, from Knocklong. He is nominations manager at Darley’s Kildangan Stud. He is a son of John Moloney, former manager of Galway Racecourse. Like the O’Rourkes, you can’t beat breeding.