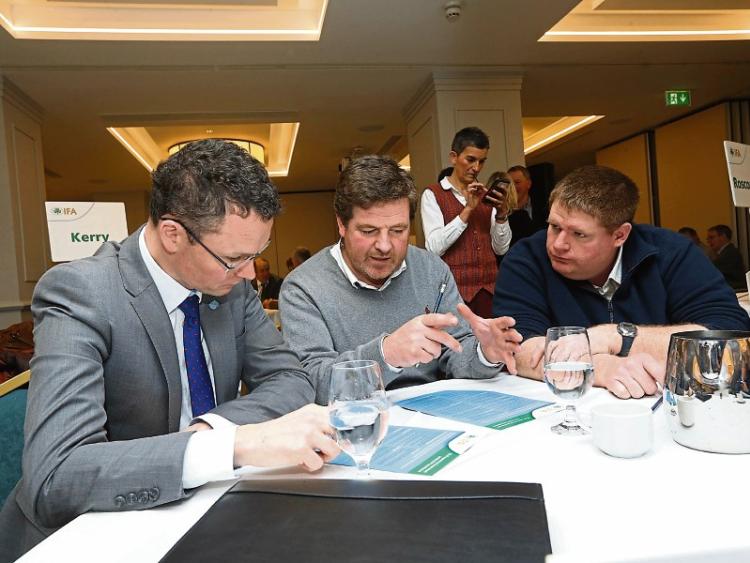 THE IFA says confirmation by British environment secretary, Michael Gove that the UK would apply tariffs in a no-deal Brexit scenario “demonstrates the gravity of the situation for the Irish farming sector”.

Minister for Agriculture, Michael Creed has confirmed that tariffs on Irish food imports would amount to approximately €1.7bn per annum.

“The minister and the EU Commissioner Phil Hogan must come forward immediately with a plan for comprehensive market supports including direct payments to Irish farmers in the event of a no-deal Brexit,” says the IFA.

Livestock farmers are already encountering severe income difficulties as a result of falling prices, increased costs and reduced direct payments. The situation is now a crisis due to the fall in cattle prices, the weakness of sterling and uncertainty around Brexit.

Limerick IFA chairman, Shay Galvin went to Dublin on the day before Valentine’s Day to lobby TDs and senators on the beef crisis. There wasn’t much love in the air.  Mr Galvin said a hard Brexit would “devastate Ireland’s €3bn beef and livestock sector”.

“IFA estimates the imposition of WTO tariffs in a hard-Brexit will impose a direct cost on the beef sector of €800m per year. While the government and other sectors are talking about preparing for Brexit, beef farmers are already counting their losses.

“Cattle prices are down €100 per head on this time last year. Brexit uncertainty and the weakness of sterling has already hit hard on beef prices and farm incomes.

“The income situation on beef and livestock farms is at crisis point. The latest independent data from Teagasc shows farm incomes are down 16% in 2018 and incomes on cattle are between €10,175 and €15,412,” said Mr Galvin.

“Our local representatives must now put the pressure on the Minister for Agriculture to get his act together on this issue before it is too late,” continued the Croom man.

The IFA presented a detailed set of proposals including an EU Brexit Emergency Support Package to politicians, demanding that Taoiseach Leo Varadkar and the Minister for Agriculture Michael Creed take urgent action with the EU Commission to address the beef and Brexit issues.

l Strong support for the live export trade to double numbers in 2019 and ensure that no further restrictions are imposed on the trade.

l Insist on an increase in the CAP budget.

l Climate change recommendations which focus on the Teagasc roadmap with no carbon-based production quota.

“It has become fashionable and popular to blame the expansion of the dairy herd for all the problems in the beef sector. As is very often the case with these easy explanations, once you look at the facts you quickly discover that they are just simply not true. For instance, the problems around farmer profitability in our beef sector were there long before the expansion of the dairy herd.

“This figure is growing, more beef will come from the dairy herd so everyone is going to have to deal with that and shift focus to maximising the return from dairy beef production rather than talking it down and undermining it,” said Mr Blackburn.

The Effin man said that the current severe drop in beef prices is an issue for all types of beef production - whether dairy or suckler - and suggestions recommending further shifting price differentials to favour one sector over the other are “completely unfair and not supported by independently verified data”.