Discord at award of €30,000 to Limerick music collector 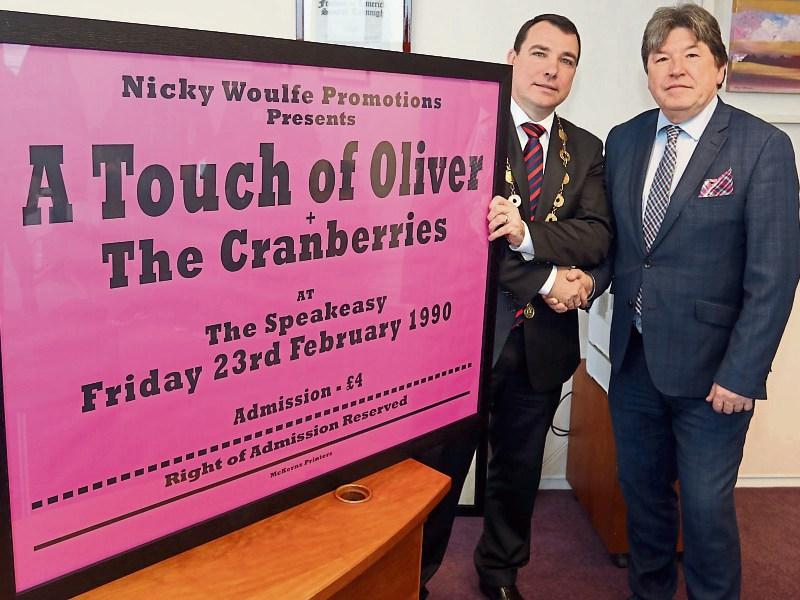 Mayor James Collins with Nicky Woulfe, who is hoping to open a ‘Music Memories and Memorabilia’ museum in Limerick

THERE was discord at council level over the awarding of a big sum of money to a proposed music museum in Limerick city.

Members of the metropolitan district were asked to approve the allocation, which represents over 30% of its annual General Municipal Allocation (GMA) funding, for Nicky Woulfe, who is proposing to inaugurate a museum.

It would visually showcase his five decades worth of music memorabilia, containing more than 1,200 vinyl records, periodicals, posters and photographs, with the facility set to feature rooms dedicated to international, Irish and Limerick-born musical talents.

But councillors were this week unhappy as to how the council executive was proposing to give the money – before other groups had had a chance to make a pitch for the funding, with Independent councillor Frankie Daly describing it as a “knee-jerk reaction”.

“One person coming to present at a meeting and getting close to 30% of the budget for tourism is too much. I agree it’s a great idea, but I think there are other groups which need to be given the opportunity to present their ideas. I’d support a project like this – but not it’s getting the lion’s share of the money,” he said.

Fianna Fail councillor Kieran O’Hanlon added: “We have an €80,000 tourism budget, and the idea of this memorabilia is excellent. It’s great Nicky has all of this. But there are other projects we have had submissions for. I would like to see the support going towards the various projects which we have proposed and shown interest in.

However, Independent councillor John Gilligan said he would support Mr Woulfe being given the allocation, and joked: “You’d never know a local election was coming up”, in relation to members wanting to approve projects from their own districts.

Cllr Séighin Ó Ceallaigh, a member of the cultural committee, added: “We are still waiting to honour Dolores O’Riordan. It’s not good enough we are waiting this long. It’s not for one person to come in and get something, and for everyone else it’s too late. Either invite all the groups in to present, or do not invite any in.”

Cllr John Loftus called for €3,000 for cultural projects around the Lord Edward Street area where he lives, including the Patrick Sarsfield Branch of the ONE, and the Tait Court Residents Association.

A decision on awarding the funds was put on ice, pending meetings with further interested parties.