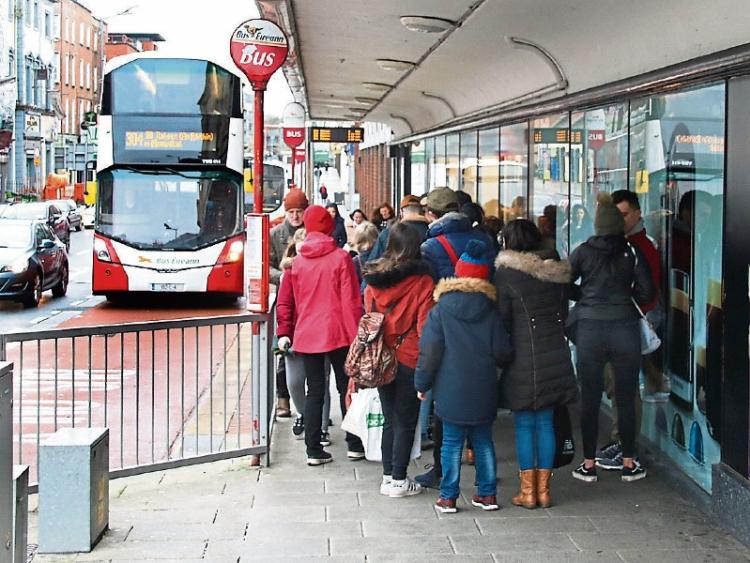 A vast majority of people in Limerick are unhappy with bus services, according to a new Limerick Leader survey

A VAST majority of people in Limerick are unhappy with bus services, according to a new Limerick Leader survey on Bus Eireann’s operations in the city and county.

The three-day online survey was conducted in response to the increasingly visible disquiet among social media users in relation to Bus Éireann operations in recent months.

And its findings appear to be consistent with the public mood.

Of the 411 people surveyed, between Friday and Sunday, 52.08% are “very dissatisfied” and 32.03% are “dissatisfied” with Bus Éireann services in Limerick.

Just 3.45% of respondents said that their bus arrives on time, the same rate as those waiting for up to an hour. The most common waiting time is 10 to 20 minutes, according to 37.93% of people, while 25.37% say they are waiting between 20 and 30 minutes. Just 13 people, or 3.2%, say they wait for more than one hour. The most common type of user was the commuter, accounting for 44.61% of respondents. Of that cohort of 182 people, 82.96% were either very dissatisfied or dissatisfied with Bus Eireann’s services.

Passengers on UL-Ballycummin 304 (270 passengers), were the most responsive with Raheen-Monaleen 304A (89), Fr Russell Road-Westbury 301 (70), Limerick city-Caherdavin 302 (50), followed by the Limerick-Ennis 343 and O’Malley Park-Pineview 303 services with 25 and 23 passengers respectively. A number of respondents use numerous services.

Survey participants were asked if they wanted to share their experiences.

Some of the main complaints surrounded “misleading” timetables, tardy leap card systems, cleanliness, bus overcrowding, buses leaving too early or too late, users being late for interviews and hospital appointments, and “rude” drivers.

In fact, 22 people—one in every 20 respondents—described their driver as “rude”, and four people suggested that drivers seek customer service training. Seventeen people criticised the punctuality of drivers. Eighteen people complimented the drivers, mainly on their manners.

A large portion of comments were made by those using the 304 and 304A services.

One international PhD student said she “wasted over 24 hours of my life across 14 months ‘waiting’ for the 304 and 304A”.

She said, on two occasions, she observed two groups of more than 12 professionals, who were visiting UL for conferences, wait for 30 minutes for a bus into the city to go for drinks and food. She conservatively estimates that they would have spent €500, but they instead decided to go back to their accommodation.

“Are Limerick businesses aware how much potential revenue is lost annually due the poor service provided by the 304 and 304A?”

One man said that he walked from the Debenhams bus stop to his workplace at the Crescent Shopping Centre because the next bus was arriving in 42 minutes.

“I walked the entire way out and not a single bus passed me by—not even ones coming from different routes. It was a 40 minute walk—on a main bus route.”

“Bus overload” was alluded to a number of times by the respondents.

The issue of numerous buses arriving at the same time was mentioned a number of times. One 304 and 304A user said: “Incredibly inconsistent. Real-time rarely accurate. Two buses arrive within a minute of each other”.

One 304 user said they waited for the bus last Friday morning for 25 minutes. “This means that I was late for my appointment in the Regional (University Hospital Limerick).”

Another user said that their commute to UL takes around an hour when not in rush hour, “and 15 minutes when I get a carpool”.

One person said they didn’t blame the drivers or Bus Eireann, and that they can “only work with the infrastructure that the council and the National Transport Authority have given them”, adding that both “have not prioritised investment in public transport infrastructure”.

One 304 passenger said that they are learning to drive and “as soon as I can, I will no longer use the bus service as it’s not reliable”.

A number of people have criticised the Leap card system, saying that it takes a number of seconds for passengers to process payments. The electronic timetable has been a widespread issue for many. One passenger said that one will say “that a bus will arrive in 15 minutes and then no bus shows up and it is removed from the timetable and the next one could be 40 minutes away according to the timetable”.

Six people suggested the idea of a tram system. Nine people reckon Limerick’s public transport should be privatised. One 304 user suggested that people should pay by distance with a “tap-on, tap-off” service, while another user said that there should be no ticket-purchasing on buses. People suggested the development of dedicated bus corridors for popular destinations, while one person reckoned there should be a bus depot in Castletroy. Alternative bus operations were mooted in the survey, including small “hopper” buses in smaller areas, shuttle buses for students in the city, and a park-and-ride service. Of the 65 respondents who were satisfied, very satisfied or indifferent, just four people said they would change nothing, while one person said: “Couldn’t be better.”