A Troy odyssey as Nightflyers takes flight from Limerick 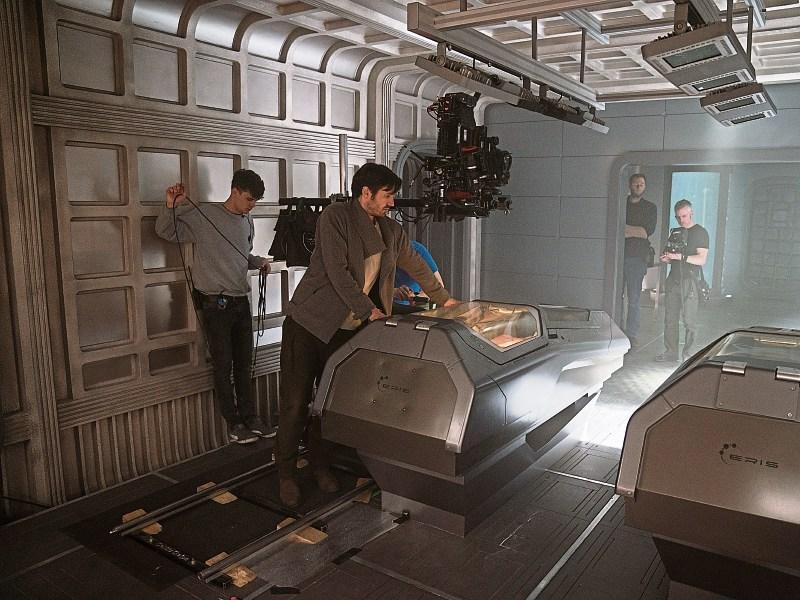 Eoin Macken, the star of Nightflyers, on set during filming at Troy Studios in Castletroy Picture: Netflix

IF SOMEONE were to tell you there was extraterrestrial life roaming about Limerick, you’d probably reply, self-deprecatingly: “Yeah sure, what’s new?”

But in this case, we are talking about the telekinetic alien life, the superhuman who can hack technology by intravenously accessing hard drives, the kind that is conditioned to live in space since birth.

These three, just to skim the surface of the whole space crew, are from the future, too—sometime in the 2090s.

Their mission? Vying to be the first to make contact with intelligent life in the unknown abyss that is the universe, this is a desperate bid to potentially save what’s left on Earth.

And is it smooth-sailing? No. In fact, in the first few minutes of the Nightflyer’s journey, there appeared to be a technical malfunction that nearly led to everyone’s death.

Maybe it wasn’t so technical? Perhaps, it was due to telekinetic mischief? Who knows? It’s definitely one for the ship’s black box.

But this prescience of disaster sets the tone for what has been one of Ireland’s most highly-anticipated television productions in recent years.

Nightflyers—the largely unknown 1980 George RR Martin novella—aired on Netflix for the first time last Friday, following a full run on America’s Syfy channel in 2018. Filmed at Troy Studios (ex-Dell, ex-City of Culture, ex-Wang) in Castletroy, this daring intergalactic expedition has brought an estimated €50m to the local economy, as well as a welcome kickstart to transforming Limerick into a regional film hub.

Featuring a fresh international cast, including Irish lead Eoin Macken (whose grandfather was Limerick City manager in the 1950s), the Nightflyers team is responsible for equipping scores of students and young people with first-hand film studio experience.

But before the Nightflyer could lift-off, it needed to first dock somewhere on Earth, and its journey to the Castletroy station is an interesting one.

When creator and showrunner Jeff Buhler was pitching the idea, by no means was an adaptation an original concept; the sci-fi was first adapted into film in 1987, which took in a gross US box office of €1,149,470 .

But that was 14 years before Game of Thrones, written by George RR Martin, became one of the biggest pop culture hits in the world.

When Buhler pitched it, he styled it as The Shining in space. The show itself has been described as “Psycho in space” by George RR Martin and there are evidently hints of other sci-fi classics in the mix, such as Alien, Predator, 2001, Twilight Zone and even Black Mirror.

But apparently, Limerick was not on the top of the list.

Show producer Sean Ryerson says: “It was supposed to originally play in Manchester and then the Ariana Grande concert happened.”

It wasn’t long after that when Troy Studios “came out of the woodwork”, he says. And so the massive Nightflyers ship was built in an industrial estate in Castletroy, just a few yards from the University of Limerick.

Obviously, while parts of the ship were constructed for filming purposes, the entire vehicle is a concept, designed by Bafta-winning Guy Hendrix-Dyas, who was practical about how the Nightflyer came to being.

Revealing the concept to the media at an exclusive tour of the Nightflyer on the final day of shooting last June, Buhler says the ship was constructed with the future in mind.

“Everything from here down,” Jeff points to a poster of the ship, “was built in the 2040s. This is the oldest part of the ship, and this technology all mirrors what you would see on the International Space Station, pushed forward, maybe, 20 or 30 years.”

The rest, including an avant-garde dome, was built in the 2080s. But even though it is far into the future, the technological concepts in the Nightflyer are not overly-outlandish.

For example, in the opening scene of the series, actress Gretchen Mol, who plays a stubborn psychiatrist, is seen using a saw that looks like a very handy pizza cutter. But in this case, it wasn’t exactly used for cutting pizza. Most of the studio specs, including the guns and weapons, were made by a 3D printer in-house.

The future-realism also applies to the ship’s interior. This journalist had the privilege to enter one of the character’s bedrooms, which was fitted with all the mod-cons and furniture, bearing a neutral white theme, with ambient LED lights, giving the chamber a serene, soft glow. Bauhaus meets the cosmos.

These simple architectural designs are replicated somewhat around the shuttle set. But there are two notable designs that are just magnificent.

The Nightflyer’s wheel-shaped dome is an actual feat at Troy Studios. In space, there is no gravity, so you can walk (or jog, whichever pleases you) in a never-ending circle in the dome. But there’s a bit more gravity in Limerick, so the studio designers had to put their thinking caps on.

When you enter the dome, the room is shaped like a half-pipe, and by using mirrors as walls on either end, it gives the optical illusion that there is continuity the whole way around. But upon walking closer to the end of the room, you are met with your own reflection. This visual deception is a truly innovative way to look at studio space, making the impossible not just possible, but feasible. Not surprising since it was built in the 2080s, after all.

Then there’s the memory playback suite, which features prominently in the first episode with Eoin Macken, who plays an ambitious astrophysicist who is leading the mission.

This cylindrical space is made of a metal platform on which a chair sits, surrounded by hundreds of copper cones that make you feel like you’re inside the retina of a fly. It wasn’t operating while I was perched on the chair, but this room allows crew members to project memories. And with a ship that has technical faults at the start, what could possibly go wrong?

While it may be fictitious and on-screen, this inventive set-up is real and tangible, built using local hands in the outskirts of the city. At one stage, there were 450 people walking through the gates of Troy Studios during the construction phase of the Nightflyer. This is the start of the Hollywood dream for Troy, like it has been for many similar locations in cities around the world.

Asked if he was conceptualising season two, something we may get confirmation on in the coming weeks or months, Buhler says: “Yeah, I have some ideas. I feel like we threw so much at the wall in season one. When I pitched the show originally, you can’t walk in and pitch a TV show this big, and not be able to tell people where season two, three (will go) - even if it’s an idea specific, like here’s what’s going to happen to each character. Yes, I know roughly what’s going to happen in season two, and I know where we’re going, storywise, further down the line.”

Mike Cantwell, of Innovate Limerick, which was pivotal in bringing the Netflix series to Limerick, says it would be great to see the return of season two. But he said he is “optimistic” about other positive announcements in the coming months for Troy.

“We have already conversations with a number of production companies, who are interested in coming to the region now, because we have shown that we have the capability to do it within the region.”

Nightflyers has taken flight and is now available to watch on Netflix.