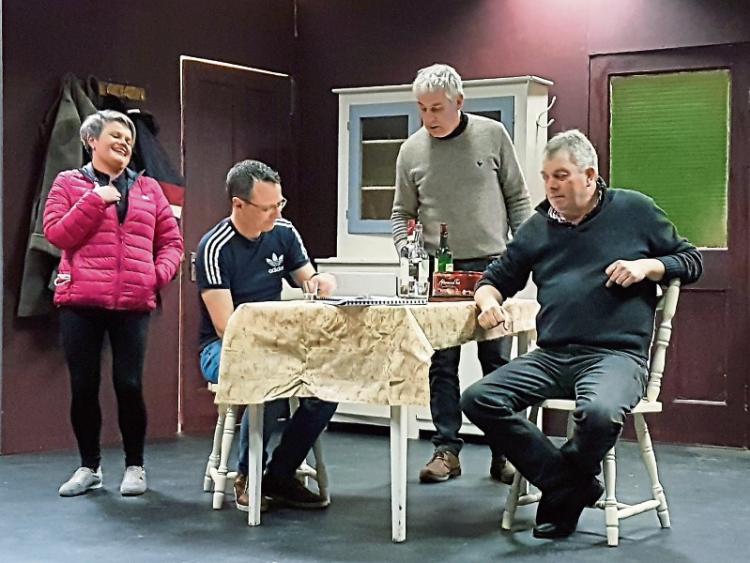 THE dark humour of Martin McDonagh’s The Lonesome West has persuaded Fine Gael councillor John Sheahan back onstage for his first major acting role for a number of years.

But John is no stranger to the Athea Drama Group whose production it is.

“I have been doing walk-on parts,” he explained. “But I didn’t play any major role since Unforgiven six or seven years ago.”

“I read this one with Tommy Denihan and I thought we got on well. I said I would have a cut at it,” he added.

A big attraction for John was the very small cast of four in The Lonesome West, making it extremely easy to arrange rehearsals.

And, with the May local elections waiting in the wings, he also had the assurance that the drama wouldn’t go beyond February.

The curtain goes up on The Lonesome West next Thursday for a run of six nights. But if past form is anything to go by, those six nights are likely to be added to.

“It is a very dark comedy,” John explained. The play, one of McDonagh’s Connemara trilogy, hinges around two feuding brothers Coleman and Valene, whose father has just died in a shotgun 'accident.' Valene, played by Tommy Denihan, is only interested in his religious ornaments, and drinking poteen while Coleman, played by John, is only interested in eating, and attends funerals to collect free sausage rolls and vol-au-vents. The local priest, Fr Welsh (Michael O’Connor) does his level and often despairing best to ‘civilise’ them, helped along by his devoted sidekick, Girleen, played by Annette O’Donnell. The play has plenty of black humour and explosive moments. And the language is very much Connemara. “We have to slow it down to allow the punchlines to come across,” John explained.

“It is not an easy play to do,” John acknowledged. “But I think we will do it justice.”

He has, he continued, very much enjoyed his return to a central role, pointing out that his involvement with drama goes back to his school days. His first appearance onstage, he revealed was a Tarbert Comprehensive School production of O’Casey’s Shadow of a Gunman in 1981.

“There is always great camaraderie when you are doing a play,” he added. Laughs, mistakes, arguments are all part of the mix, along with a great sense of satisfaction.

This year’s production is directed by Damien Aherne and produced by Oliver McGrath.

It is recommended for over 12s due to strong language and adult themes.

This year, for the first time, a booking system has been put in place. Phone or text 087-2743189 with details of your contact number, the number of seats you require and the date you require them to ensure you don’t miss out.