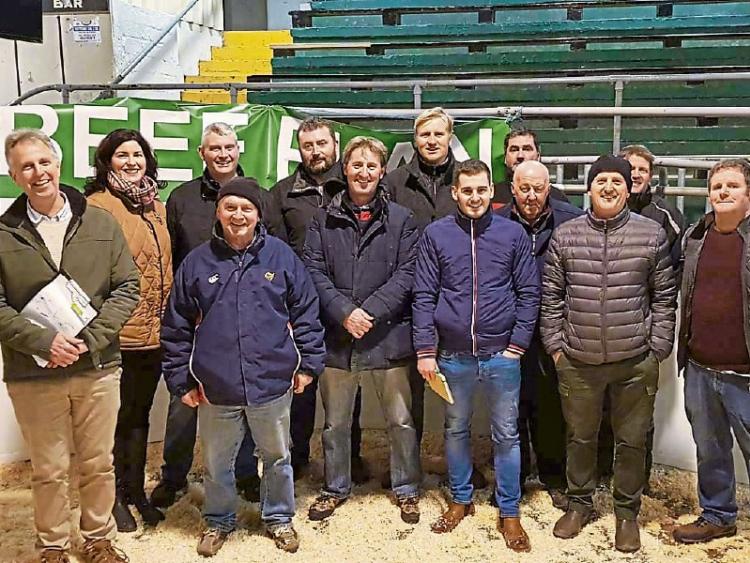 A CROWD of 350 at the Beef Plan Movement’s first Limerick meeting is an indicator of the seriousness of the current situation.

The attendees were packed ringside at Kilmallock Mart week to hear a range of different speakers. The movement and associated plan has been put together by farmers for farmers. Its objectives are to regain control of an animal from birth to slaughter and beyond; returning a cost of production price plus a margin as a minimum, and regain respect within the beef industry.

Committee member, Paddy O’Sullivan opened the meeting by giving a brief outline of beef farmers’ demise to date. He said the Beef Plan was for all farmers, part or full-time, dairy or beef.

Eamon Corley, national chairman of the Beef Plan Movement, said the plan was about taking back power given away to meat factories and retailers.

“Meat factory prices are 40c/kl. less now than last year. Input costs are way up. We are being squeezed out of existence. In 1994 farmers got 40% of the carcass retail price, 10 years on 30% and today 19%. Factory feedlots are the way of the future if no action is taken,” said Mr Corley, who wants purchasing and producer groups in every county.

The factory restrictions for QA bonus have to be lifted and farmer representation on factory killing lines is important, he said.

“They claim we got 106% of the EU beef average price last year. They are not comparing like with like. What you do find is for the last 10 years we got 95% of the EU average price. They claim 40,000 (up somewhere in the region of six to eight thousand) weekly kill numbers are causing problems but if you look at it in terms of beef tonnage the actual throughput has only increased by 4 to 7% in the last 10 years as the individual carcass weights have fallen,” said Mr Doyle. We will have to pull together for the benefit of farmers no matter what organisation we belong to, said Mr Doyle.

“Our carbon footprint going forward is important. If Leo Varadkar took this matter seriously he would introduce supports for the installation of bio methane digesters as has the rest of Europe. Europe has them and we have nothing,” said Mr Doyle.

“We all have one thing in common, we are all working for nothing. One farmer can change nothing but 40,000 could change everything,” said Ms O’Sullivan, who was critical of Bord Bia’s inspection detailed process that could take three hours.

Dermot O’Brien, agricultural adviser and suckler farmer, said he meets a cross section of farmers through his work. He believes farmers have adopted a defeatist approach overall and are increasingly isolated and have no voice until now. He said the Beef Plan is offering structured solutions to address beef farmers’ problems. He believes the plan is definitely achievable provided farmers unite as one.

Jason Fitzgerald, a dairy farmer, was a suckler farmer with 60 suckler cows but changed over to dairy because it was no longer viable. He criticised the government for not drawing down available EU funding to assist.

Jack Madigan, of Kilkenny Rose Veal company, told of his success in supplying veal to a home market and a more extensive export market. Eighth to ninth month O2 Friesian bull calves, grain and grass fed, are his target animals. He felt his business model could be expanded with the right marketing and could be the answer to our ever increasing dairy beef herd. He said consistency of supply and good marketing was vital.

Sean Griffin, meat exporter, gave the meeting an insight into the opportunities out there for meat exports.

Limerick committee member, Sean O’Connell, Cappamore, said they now have a template in the Beef Plan by which the crisis in beef farming can be addressed.

“We should all stand behind it no matter what our colours are. If not we will become tenants to meat factories on our own farms,” said Mr O’Connell.

Fellow Limerick member, David Murphy, Abbeyfeale, said: “A farmer keeps the animal for two years. He gets a 20% stake in the retail value. The factory has the animal for three weeks and he gets a 30% stake. The retailer has the beef for three days and gets a 50% stake. That has to change.”

See beefplan.ie to view the full plan. The next Beef Plan Movement is on in Castleisland on Monday, February at 7.30pm.