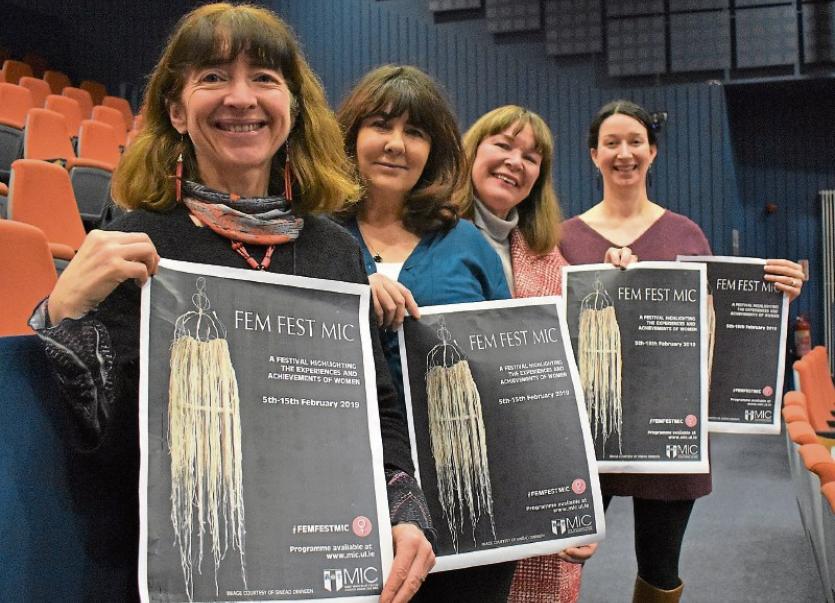 A FESTIVAL honouring the diversity of women’s experiences since the 1880s through musical and theatrical performances, art exhibitions, lectures and seminars is set to take place in Limerick next month.

Taking place from February 5 to 15 at Mary Immaculate College, Fem Fest will highlight the achievements of women during the month that celebrates both the feast of St Brigid and V-Day, a global movement to end violence against women.

The festival was inspired by a successful production of Eve Ensler’s The Vagina Monologues, staged by MIC female staff and postgraduate students for International Women’s Day, according to chair of the Fem Fest organising committee Dr Dorothy Morrissey.

“I am excited by the range of events taking place as part of Fem Fest MIC,” said Dr Morrissey, who is also a lecturer at MIC. “It’s a great honour to be a part of an event honouring the diversity of women’s experiences and achievements since the 1880s.

“MIC itself was founded in 1898 and run, at its outset, by women for women,” Dr Morrissey said. “It is fitting, therefore, that MIC should host a festival about women’s experiences and achievements.”

Festival highlights include the Irish Women’s Writing Network Seminar on Friday February 8, where Martina Devlin will read from her recently published collection of short stories about women who shaped Ireland.

Donna Gilligan will also talk about women’s suffrage, Lizzie Nunnery will talk about her critically lauded play about the Sheehy-Skeffingtons.

MIC BA in Contemporary and Applied Theatre students will also perform a short scene from the play.

On Tuesday February 12, Fem Fest will hosts a sports event highlighting and acknowledging the often-overshadowed sporting achievements and leadership of MIC’s female students and staff, both past and present.

Physical violence, which is never far from the surface in women’s writings about women’s suffrage, is the subject of  two seminars, taking place on February 8 and 12.

Performance poets Sarah Clancy, Illyana Kuhling and Kathryn Keane will read and perform from their work at lunchtime on February 7.

Professional theatre artist, and MIC PhD candidate, Aideen Wylde, will perform her one-woman play, Here Shall We Rest in a lunchtime performance on February 8, with two evening performances  set to take place February 7 and 8.

We are the flock, an installation of video, narrative and lens-based work from an ecofeminist perspective by MIC lecturer Tanya de Paor, is also set to run throughout the festival.

Staff across a range of disciplines and departments will provide lunchtime lectures during Fem Fest at MIC, on such diverse topics as representations of girlhood in Peter Pan, MIC’s first graduates, Paula Meehan’s poetry and the representation of female migrants in contemporary Irish literature.

Some of MIC’s lecturers will also open their classes to the college community and to the public as part of Fem Fest. “Come along and either sit back and enjoy what is on offer or add your voice to the conversations that will unfold,” Dr Morrissey said.

See www.mic.ul.ie for a full programme of events.