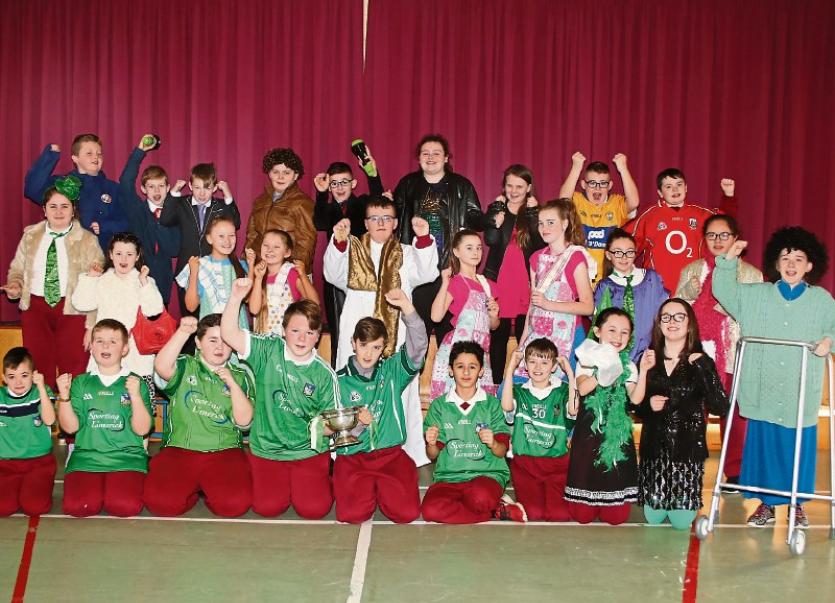 Students at Corpus Christi, primary school, Moyross who are due to show a short film they made about the hurlers in the upcoming Fresh Film Festival Picture: Adrian Butler

AN ORIGINAL movie that chronicles the Limerick senior hurlers’ journey to glory last August after a 45-year wait, created by Limerick city primary students, is due to premiere this Friday.

Written and filmed by students at Corpus Christi, Hon the Treaty also stars the students of the primary school in leading roles, as the team, managers and sponsors who all played a part in the victory.

Hon the Treaty, will be shown as part of this year’s Fresh Film Festival, and features a soundtrack recorded by the students in Hazelgate studios.

“Huge work and fun has gone in to the making of this movie, as a tribute to the Limerick hurlers,” Bernie Keating of Corpus Christi said.

The film was shot in several city locations including the school in Moyross, the Limerick Institute of Technology sports facilities, the Treaty Stone and in Jen’s Hairdressers, Ms Keating added.

“There are twists and tales of dejection, comedy, musical interludes and ultimate joy and celebration,” she added.

“It’s a story of disappointment, determination, hard work and celebration.”

Hon the Treaty will star Marty Morrissey, John Kiely and his background team, The Sunday Game Panel, Des and Grainne from Up For the Match and RTE presenter Miriam O’Callaghan. Corpus Christi previously stole the show ahead of the historic final last August, when the school’s choir delivered a heartwarming performance on RTÉ’s Up For the Match.

The film will also feature pupils starring as team sponsor JP McManus, and Limerick captain Declan Hannon who will rap about his dreams of winning the Liam MacCarthy Cup.

All the Limerick hurling team will also be portrayed, as well as their wives, girlfriends and families who journeyed with them.

Hon the Treaty will be screened at the LIT Theatre this Friday February 1, at 11am.