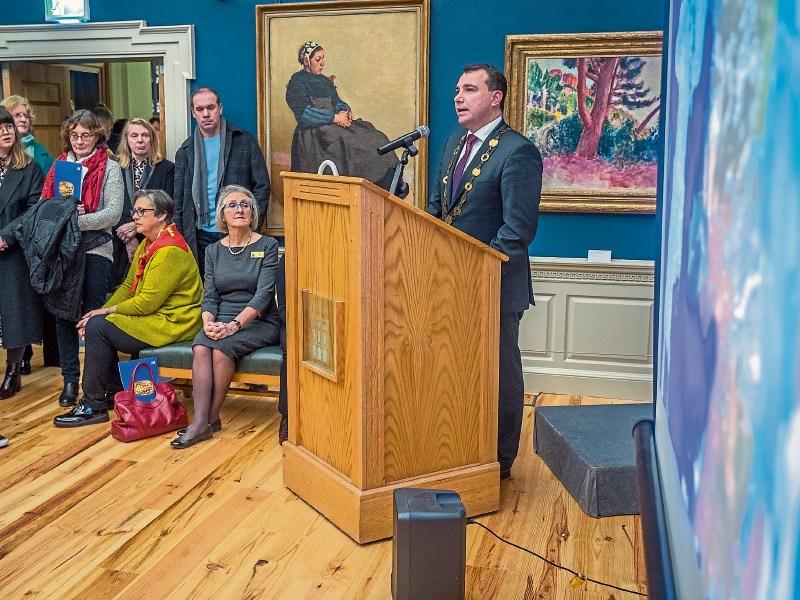 Mayor James Collins at the reopening of the Hunt Museum and the launch of a new exhibition Picture: Keith Wiseman

And as part of the official reopening, the Rutland Street museum also launched its vision in the new 2025 Hunt Museum Strategy.

The new strategy is “collaborative work” among community stakeholders, partners and volunteers that “sets out aspiration for the years to come”.

Commenting on the strategy, Hunt Museum board chair, John Moran, said that they are “setting our sights higher” with the city’s growing ambitions.

He said that the Hunt Museum, a space of “hidden treasure,” will transform into a place of “international standing with creative, educational, research, social and economic benefits”.

“We want to build upon the huge legacy of the Hunt family and on our previous 21 years. The Board feels that this Strategy with its emphasis on our first three priorities of the Hunt Collections, public engagement and innovation will help us for our fourth priority: raising the very considerable funding to live up to these ambitions,” he said.

As part of achieving their ambitions, the Hunt Museum will be digitalising—with full access—to its collections with the aim of “becoming the lead in cultural heritage education for the region”.

There will also be a more “coordinated approch to planning and development of our gardens and reorientation of the building,which we would like to face towards the River Shannon,” the Hunt Museum said.

Friends of the Hunt Museum chairperson, Robert Williams, welcomed the new strategy: “We welcome the ambitions set out in the plan and will do our best to support and execute the goals it outlines.”

The Hunt Museum is one of the largest private collections in Ireland, with objects dating from the Neolithic period to the 20th century, all of which were donated by John and Gertrude Hunt to the people of Ireland.

All of the items are housed in the 18th century Rutland House building, formerly known as The Custom House.