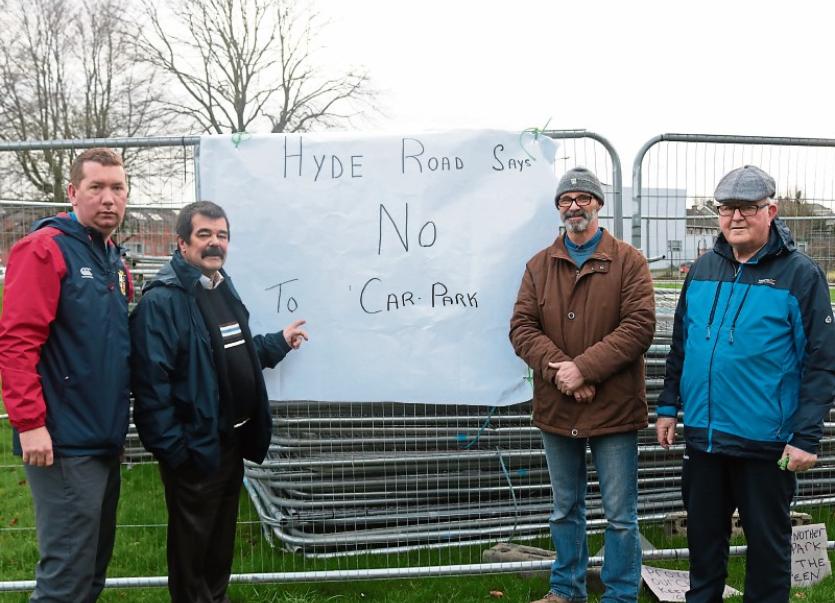 There has been widespread opposition to the Hyde Road parking plans. Staging a protest last week were Daragh and Noel Hannon with Ger Jackson and Christie Cosgrave

LIMERICK City and County Council has been asked to “apologise” to Hyde Road residents, after it was claimed ownership of the land used to develop a car park is actually under dispute.

Local activist Noel Hannan also called for the local authority to “abandon” any plans for a car compound at the Hyde Road park, work on which kicked off last week.

It comes after the Limerick Leader learned the ownership of the land is being claimed by the beneficiaries of the Pearse Estate.

The late Mary Ellen Pearse owned huge swathes of land across the southside, including the area which the council is planning to develop on.

But a dispute over the compensation to Ms Pearse, who died in 1958, meant no money ever changed hands.

Now, a spokesperson for the Pearse Estate beneficiaries claims that this makes the CPO null and void, and by rights ownership should fall back on the estate.

“Limerick Council has no title to do work there,” they told this newspaper.

A case on the land ownership has been listed before the High Court for the last five years, but has yet to be heard.

In that time, the estate informed the Land Registration Authority who, it’s understood, ordered a freeze on new registrations to the Hyde Road park.

Although the council insists just 10% of the land will be used for parking spaces, with the remainder landscaped and turned into a public walking space there is widespread opposition.

More than 1,330 people have signed a petition set up by election candidate Elisa O’Donovan, citing the loss of a green space, traffic danger for local youngsters and a feeling there are other car parking spaces which could be used instead.

“The people objecting to this park are there for the last 70 to 80 years, and I’m sure they would have some rights in relation to what happens there. I would be supportive of their objection. They have lived in the area, and whatever goes in there should be their choice,” said a spokesperson for the Pearse Estate.

Mr Hannan added: “It [the car park] should be abandoned, filled in, the fence should be taken down, and the people of the Hyde Road should get an apology from Limerick City and County Council.”

He added the car park would be a “terrible eyesore”.

“People up there feel cheated. The council has just come along, put up a fence and made it an eyesore, and the bottom line is – where are their children going to play,” Mr Hannon asked.

A council spokesperson did not respond to several requests for comment from the Leader. They have previously defended the project, saying it has already been passed by members, and the land affected by the plan is not in regular use.