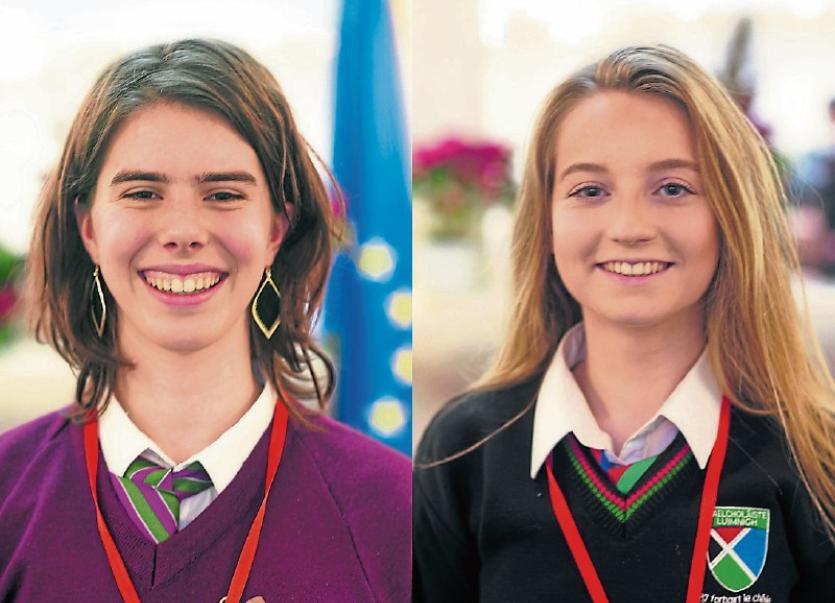 AS CELEBRATIONS marking the anniversary of the first Dáil took place this week, two “intelligent and insightful” Limerick students delivered special addresses from the venue where it first met 100 years ago.

The presentations by the students were delivered in the Round Room of the Mansion House, the venue for the first public sitting of Dáil Éireann on January 21, 1919.

“The calibre of the students’ presentations is simply outstanding and will be inspiring to all those who hear them,” Ceann Comhairle Seán Ó Fearghaíl TD said, speaking before the ceremony.

“These are brave, empathetic, intelligent and insightful young people with powerful messages.

“There can be no better way to commemorate the first hundred years of Dáil Éireann than to highlight voices of future leadership in our country as these students surely represent.”

In their addresses, Ms Ní Laighin spoke about the dangers of alcohol to our society, while Ms Ní Mhathúna asked where the pride in Irish has gone.

Other students chose topics that included the power of democracy, the impact of social media, challenges in mental health services, coping with stress and the relevance of education in the real world.

Ms Ní Laighin and Ms Ní Mhathúna were selected from 350 students following a nationwide competition open to students across the country.

The selected group, all aged between 16 to 17 years old, spent many hours preparing their presentations as part of 13 TED-Ed Club lessons under the guidance of their teachers and parliamentary education officer Conor Reale.

Mr Reale, who is from Hospital in County Limerick, set up the Oireachtas Education TED-Ed Club.

“TED-Ed clubs are a branch of the main TED organisation where secondary school students can create, craft and deliver a speech in the TED style around a topic that they feel strongly about,” he said.

“They go through a series of lessons called ‘explorations’ from TED. I delivered those through a mixture of onsite sessions in Leinster House and online as well. I set it up as part of our Dáil 100 celebrations to give young people the chance to speak in the building where the first Dáil met.”

Both presentations by Ms Ní Laighin and Ms Ní Mhathúna will be available to watch on the Ted-Ed YouTube channel.