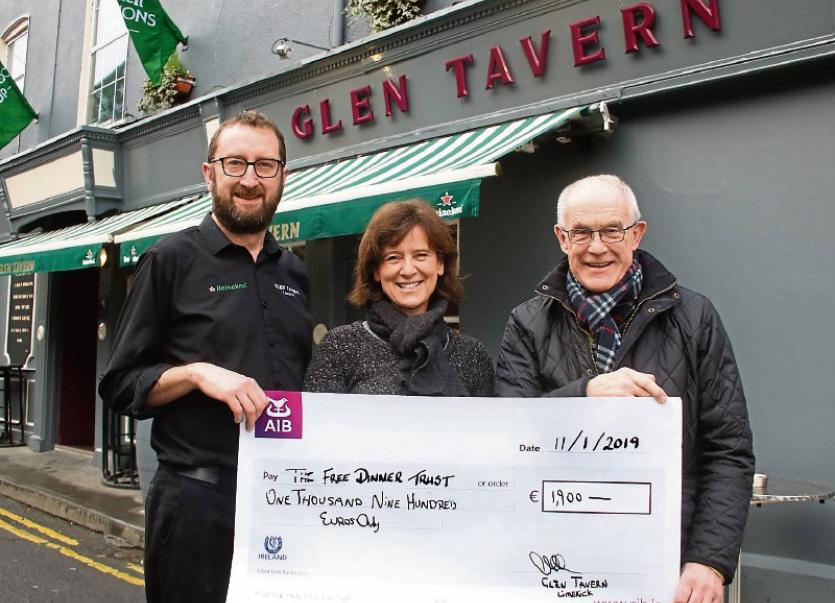 A LIMERICK charity has received a New Year’s boost thanks to an extraordinary case of mistaken identity.

Every Christmas, Ger Callanan, proprietor of the Glen Tavern, organises a Christmas raffle with the proceeds going to a good cause.

At the start of December, he received messages from people in Scotland asking where they could buy their Christmas dinner for the homeless.

This came after it transpired that the Glen Tavern in Dunfermline was selling these for cost price, with an aim to help those less fortunate.

“We looked at what they were doing and thought fair play to them,” Ger explained, “We decided any proceeds which came from our Christmas draw, any excess would be donated to a homeless charity.”

And that lucky charity was the Free Dinner Trust, which has just moved into the cafe at the Limerick Youth Service beside the Glen Tavern in Lower Glentworth Street.

Headed by Siobhan Wheeler, the charity affords free dinners to people who are less able.

“I’ve known Sinead for 20 years. She has a heard of absolute gold. The kind of person you’d love to give a leg up to. It’s run by Limerick people for Limerick people in Limerick. That’s what appealed to me,” he said.

“It was an easy decision”.

Thanks to donations from companies and individuals giving more than the entry fee, some €1,900 was raised for the Trust.

Siobhan said: “It’s fantastic in lots of ways. We have just moved to a new premises and our expenses have gone up a lot as a consequence. We are not sure by how much. Normally most of our funding is through the Redemptorists campaign, but we do need to top it up. This really helps.”