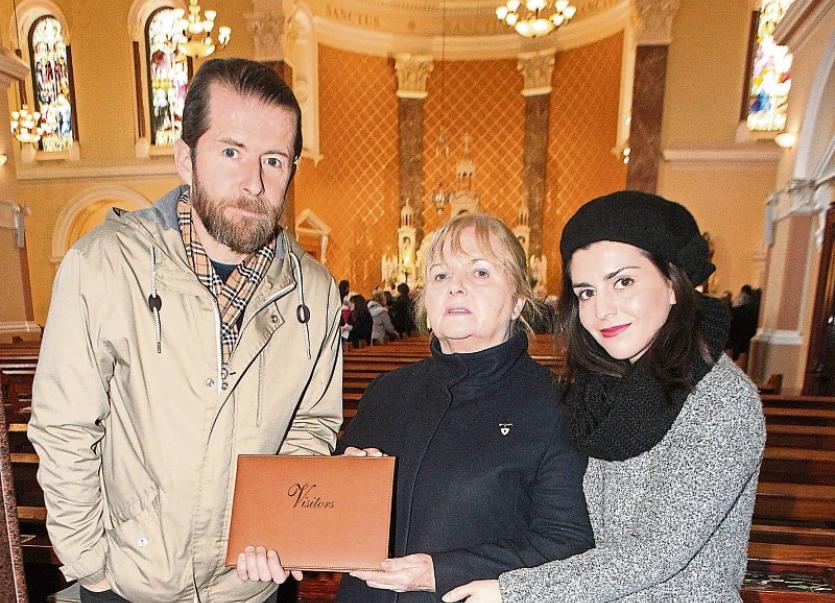 Mark O'Connor and Stefania Bardi presented a book of signatures from the Piano for Dolores event to Eileen O'Riordan after the Mass Picture: Dave Gaynor

A BROTHER of Dolores O’Riordan has thanked fans for their “brilliant” support for the family on the first anniversary of The Cranberries singer’s death.

Brendan O’Riordan was speaking to the Limerick Leader outside a special Mass at St Joseph’s Church yesterday lunchtime.

It was held at the request of the O’Riordan family, for people who were unable to make the superstar’s memorial Mass in her home parish at Ballybricken last weekend.

On the first anniversary of her sad passing last Tuesday, a special event was held in Ormston House allowing fans to come and play Cranberries classics and reminisce in their own way.

“Everybody has just been brilliant to us. It’s great to see the support from everyone, especially through the music at Ormston House. All around the world, she brought so much love and happiness to lots of people, so it’s nice to see that returned,” Brendan said.

The Mass was led by Jesuit priest Fr Liam O’Connor, in the same venue where the 46-year-old Ballybricken woman lay in repose 12 months ago.

It was also attended by Dolores’s mother Eileen, her sister Angela, brother PJ and many more of the extended O’Riordan family.

Fr O’Connor described Dolores as “an inspiration to people across the world.”

“Our indebtedness to Dolores has been well expressed many times. On the first anniversary we join with Dolores’s mother and family, in remembering that death does not unravel the bonds of friendship and love, and we give God thanks for Dolores,” he added.

There was a big attendance in St Joseph’s Church, with the congregation being given Mass cards bearing the singer’s image, asking them to pray for her, “that she may sing for us with the angels.”

Antoinette Bourke from Dooradoyle said: “She was an icon really. She never lost her humility. She was a proud Limerick woman, and was always accessible to people.”

Her husband Eugene added: “A  year goes by so fast. Dolores was such a great ambassador for Limerick throughout the world. You see there are people here from Brazil and across South America paying tribute today.

“She will be truly missed.”

Mark O’Connor, Ennis Road, who co-organised the ‘Piano for Dolores’ event at Ormston House, presented a book of tributes to Eileen O’Riordan. It contained more than 300 messages from people paying their own personal respects to the Linger and Dreams star.