WATCH: ‘Dolores would be so proud’ - The Cranberries honoured at University of Limerick 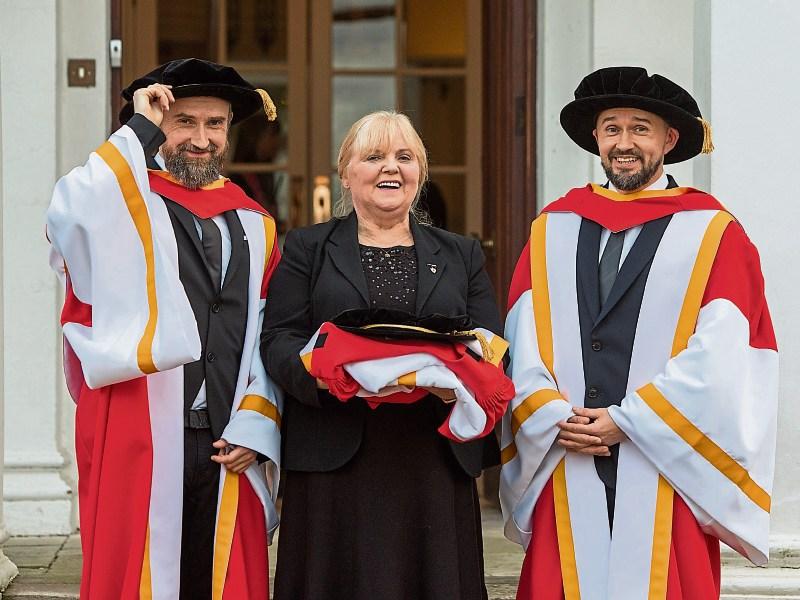 IT WAS a day of “mixed” emotions as the family of the late Dolores O’Riordan and her fellow bandmates were honoured by the University of Limerick this Friday.

As UL Winter Conferrings drew to a close this Friday afternoon, Eileen O’Riordan, the mother of the late rockstar, was presented with a special posthumous Honorary Doctorate of Letters for Dolores.

This week marked the one year anniversary of her sudden passing in London last January.

“I know Dolores would be so proud to receive such an honour from her hometown,” Ms O’Riordan said.

“It would mean so much to her. No matter where she travelled or lived, her heart was always in Limerick and would take any opportunity to return and spend time here with her family, friends and band members.”

The Cranberries band members Noel Hogan, Mike Hogan and Fergal Lawler were also presented with Honorary Doctorate of Letters from the university.

Speaking at the university this Friday, Noel Hogan said it was a day of “mixed” emotions to return to the UL campus.

Noel Hogan of @The_Cranberries when asked what the late Dolores O'Riordan would make of the ceremony at @UL this Friday @Limerick_Leader pic.twitter.com/sYXnV7pdUY

“It's amazing to be back here because in many ways we began here, playing in this university, in The Stables and playing to a handful of people,” Mr Hogan said.

“Its nearly come full circle, nearing the end of The Cranberries career now and we’re back here under very different circumstances.”

“It feels like 30 years of hard work has brought us to this moment.”

Dolores would have gotten “a great kick” out of the ceremony, he added.

“These kind of things she’d get a great skit at.”

“When this award was first brought up to us, I think it was about four years ago, timing was just never right.”

“But I remember her telling her brothers who had different degrees that she was going to be more qualified then they were! That was her personality you know, so I think she’d really, really be loving this today.”

When asked if she thought Dolores had known how loved she was in Limerick, Ms O’Riordan said: “No. I don’t think she did.”

“I didn’t realise how much she was loved here,” Ms O’Riordan said, adding that tributes following her death have been a great comfort to the late rockstar’s family.

“I keep telling the children how much everyone loved her.”

“I just wish she was here but I’d say she is here with us today in spirit,” Ms O’Riordan added.

Mr Lawlor's award was accepted by Noel Hogan on his behalf as he was unable to attend this Friday.