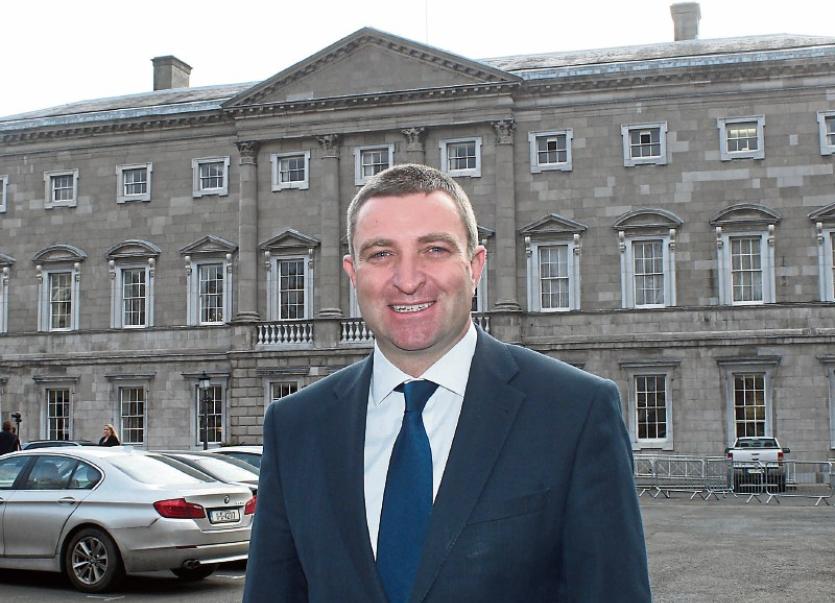 Deputy Niall Collins and below, the Limerick Leader page one exposé from May 2017

THE COUNCIL has removed barrels of secretly buried chemicals a year and a half after it was exposed by the Limerick Leader.

Whistleblowers contacted Deputy Niall Collins and this newspaper in May 2017 with the alarming information and their belief it is connected to a “circle of cancer”. They said up to 20 barrels of toxic waste were secretly buried in a field in Friarstown, Ballysheedy, around 25 years ago.

“Everyone is asking why so many people in Friarstown are passing away from cancer. It is like a circle of cancer in a mile and a half radius around where it is buried,” said the whistleblowers.

“Up to 30 people have died from cancer in the Friarstown area in the last 15 years. There are currently six or seven battling cancer and a number of others have beaten the disease. This area has been very badly hit by it,” they added.

The council commenced an investigation and confirmed that a clean-up took place last month. They said it was done with the co-operation of the current landowner, who it is understood, didn’t know that anything was buried there.

“The operation was carried out under licence from the National Monuments Service (NMS) as the land is a significant archaeological site. At least 12 barrels of materials were removed from the site, which went to a depth of around two metres. It is not known how many barrels were there originally as some of the containers had degraded.

“All of this work was supervised by an archaeologist as per the licence from the NMS. The material has been removed to a secure location where further testing is taking place to determine the best and most environmentally friendly way to dispose of the various materials,” said the council spokesperson.

They say that, “As previously and repeatedly stated, results from the samples taken were cross-matched with well water samples and showed that contaminants were below laboratory detection limits and/or less than Drinking Water Regulation limits 2014. As such, it is not deemed an area of concern and no threat to the public.”

While Deputy Collins welcomed that the material has been removed he said a lot of questions remain unanswered.

“What was in those barrels? Is there an investigation into where the chemicals came from and how they came to be buried in a field? I’m no scientist but if the barrels are empty then what they contained has gone in to the water course over the years and, indeed, decades. Well water samples may be clear now but that is not to say what the results would have been in the past,” said Deputy Collins.

From meeting local residents he says they have not been kept informed about developments.

“There appears to be a cloak of secrecy by the council. Everyone in the environs should have been written to. There has been a lot of cancer-related deaths in the area. Families are very worried. So many questions remain unanswered,” said Deputy Collins.

“I feel so many emotions reading anything on this as it is so personal to me. I had four siblings, I now have three. I do believe I would still have four had toxic waste not been dumped where I lived, where my family still live!  The stark reality for me is that my brother died of cancer in his forties. This is what comes to my mind when I think of toxic barrels buried so close to where we grew up. We played on this land as children, my parents safe in the knowledge ‘we were only up the fields’.”