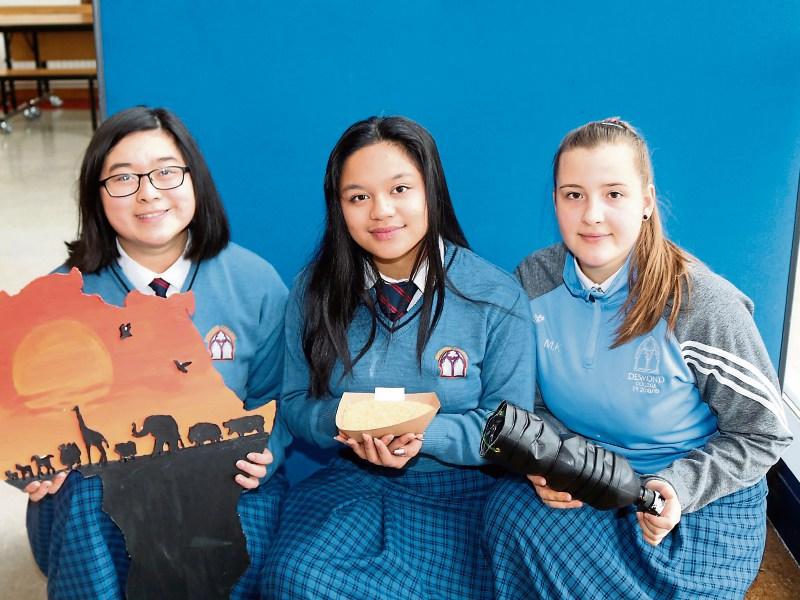 Pictured with their plastic-bottle moth-trap are, from left, Shane Baguio, Joanne Lai and Marcelina Krzywozinska

AN invasive pest which is rapidly spreading and devastating crops in sub-Saharan Africa is the focus of the project by a  trio of students from Desmond College in Newcastle West.

And the three have come up with what they believe is a cheap, low-tech, eco-friendly and easily accessible solution to the problem which has rampaged through 20 countries in the past three years.

The intriguingly titled The Rise and Fall of the Fall Army Worm is the only senior entry from Limerick to have made the cut this year and is the work of fifth year student Shane Baguio and TY students Joanne Lai and Marcelina Krzywozinska, all of whom have been living and studying in Newcastle West for years.

The trio first learned about the Fall Army Worm from teacher Donal Enright who had himself found out about the pest on a visit to Africa last year. “Because of our ethnic backgrounds, we felt empathy,” explained Shane who was born in the Phillipines while Joanne was born in Hong Kong and Marcelina in Poland.

They set out to do further research and found the Fall Army Worm originated in Central and South America but was discovered in Nigeria in early 2016. Because of its short reproductive cycle and its ability to travel long distances quickly in the adult or moth stage, the Fall Army Worm has now infested some 20 countries, including South Africa, and its presence is suspected in several more.

“Because the worms feed on over 80 plant species and develop into moths that can fly long distances, combating them requires coordinated, multi-pronged efforts,” the girls point out.

Since 2016, the worms have damaged over 1.5 million hectares of land and destroyed staple crops like corn, sorghum, and pasture grasses. In some hotspots, up to 80% of infested crops have been ruined. “As a result, many countries are expected to suffer from food insecurity both this year and next,” the girls argue.

A big problem, Shane explained, is that chemical pesticides are ineffective in tackling the issue and also are either unavailable or non-affordable. Instead, she said, farmers and their families hand-pick the worms to prevent them eating crops but it is an uphill task as, at adult stage, a moth can lay from 100-200 eggs a day.

Proposals to grow worm resistant strains of crops have been examined as a solution, the students discovered as part of their research but that is a long-term solution. Intercropping,  they point out, also offers some potential but is years away and requires additional knowledge and seeds.

But by focusing on the moths and what attracts the adult moths the girls came up with a solution, a moth-trap made out of plastic bottles. One trap simply uses leaves to attract the moths while a second one uses tea-lights and has proven to be more effective. The traps can trap up to 400 moths a day.

As part of their research, the students from Desmond College linked up with a school in Malawi, a country where damage from the Fall Army Worm has been significant. Approximately  10% of' dry season maize in Malawi in 2018 is estimated to have been lost,  double that of 2017.  The traps have be trialled in Malawi conditions and have proved to be effective.

The big advantage of their solution, the three Desmond College students  point out, is that the moth-traps are free to make and free or extremely cheap to run.