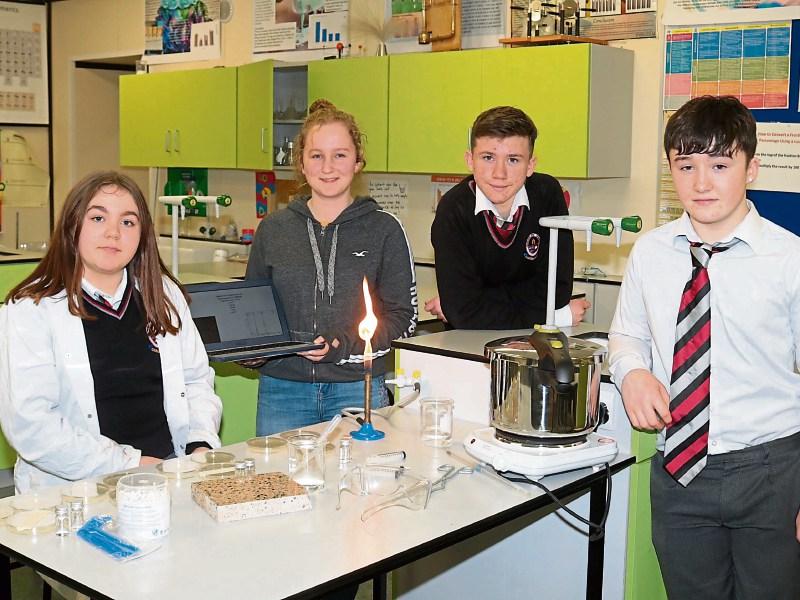 COLAISTE Chiarian in Limerick will be well-represented at this year’s BT Young Scientist exhibition with three projects making the cut.

Two of the projects at the Croom secondary school have a space-related focus while the third examines different kitchen surfaces to determine which stays cleaner for longer.

Oísin Brady-Halmschlag,14, and Kevin Lawlor, 15, teamed up for their project to design a sustainable method to grow plants on the moon.

“We were looking up stuff about NASA and we found out that they were making plans to return to the moon again and if they did they would be looking to set up a permanent habitat and would need a system to grow plants as they would provide oxygen, take in carbon dioxide and it would feed them,” explained Oisín.

Hannah Lucey, 15, created a catalogue of H II (star forming) regions across the universe. “The information was there but, a lot of the time, I had to make my own call if it was a  galaxy or not. H II regions are a big interest because the physics is understandable so it’s easier then other things in space,” said Hannah who won a special award last year for her project “How old is the universe?”

Back on Earth, Ellie Cunneen, 14, decided to test a variety of commonly-used kitchen surfaces to compare how much bacteria they maintain when cleaned.

While the full results will be revealed at the exhibition, Ellie, who suffers from an immune deficiency, says quartz surfaces came out on top.

The students’ mentor, Edel Farrell says Colaiste Chiarain is delighted that three projects were selected for this year’s exhibition as a lot of work has been done by all of those involved since before the summer holidays.