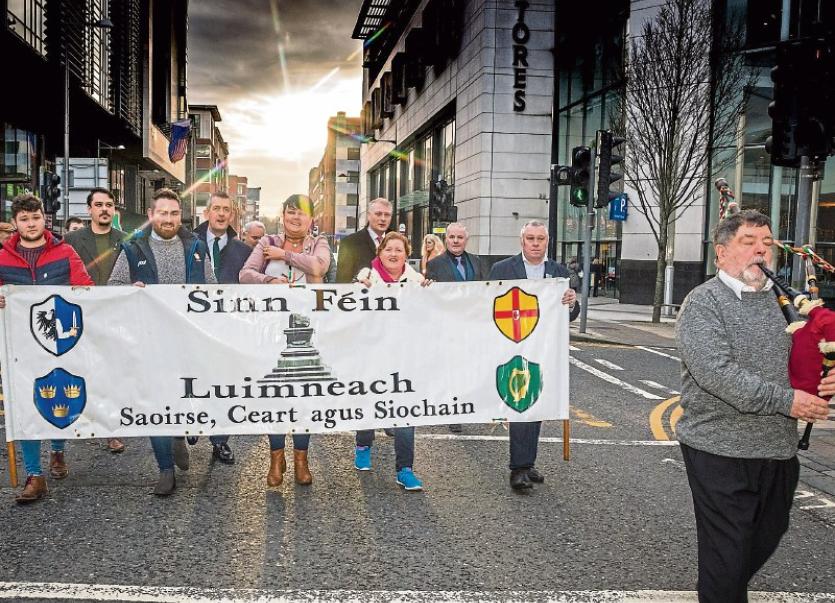 AROUND 200 people attended the annual commemoration of the death of republican figure Seán Sabhat in Limerick at the weekend.

The main speaker at Sunday’s event, which was organised by Limerick Sinn Féin, was Sligo-Leitrim TD, Martin Kenny.

Led by a lone piper, the procession began at Bedford Row in the city centre and finished at the republican plot in Mount St. Laurence Cemetery where a number of speeches were made and a wreath laid. Poems were also recited.

“Many people live their lives until they are old and grey and they go to their graves without ever being asked to make a stand for anything and those who make a stand inspire others,” said Deputy Kenny.

“The stand that he made was obviously a very costly one for him and his family. People aren’t asked any more to make those kind of stands,” he added.

Sinn Fein councillors from across Limerick attended the commemoration as did Limerick city TD Maurice Quinlivan.

“It’s an important tradition, it’s nice and simple and I do think it’s fitting that we remember him every year. He didn’t have to go and fight for what he believed in – the unification of Ireland – he did and he lost his life,” he told the Limerick Leader.

Sean Sabhat, who grew up on O’Connell Avenue, was one of two IRA volunteers who were killed after they crossed the border into County Fermanagh on New Year's Day 1957, to launch an attack on a joint RUC/B Specials barracks.