Limerick youth choir is singing all the way to New York 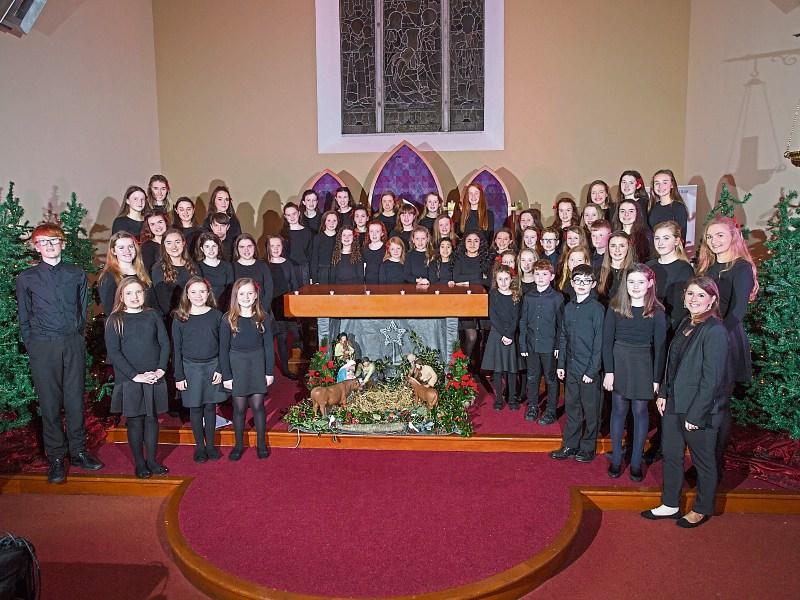 The Broadford Youth Choir pictured at their Christmas recital

THE Big Apple beckons for one of Limerick’s youngest and most vibrant choirs, the Broadford Youth Choir.

The choir, which began life in Broadford just six years ago and has won a number of competitions along the way, is now preparing to take on New York, and has several performances lined up in the city over the St Patrick’s Day weekend.

“It is a huge undertaking,” the founder and musical director of the choir, Susan Browne, acknowledged this week. “But it is very, very exciting.”

Some 34 young singers from the 63-strong choir will make the journey and will be accompanied by musicians as well as some parents.

They will perform at St Patrick’s Basilica, the oldest Catholic church in New York and  at St Peter’s Church which is located near the World Trade Centre. But the highlight is expected to be the St Patrick’s Day Mass at St Agnes’ Church on 48th Street.

The programme is not fully worked out yet, Susan told the Limerick Leader this week,  but at each church there will be a sung Mass in Irish and English, mostly Irish on St Patrick’s Day. “There will also be little community performances of Irish music and songs either before or after each Mass,” she added.

The schedule for the trip was worked out after she had sent “feelers” out to Irish American communities in New York earlier this year, a formula which has worked previously for the choir on trips to London and Edinburgh.

These trips, she is convinced, along with the upcoming one to New York, are beneficial, both for the communities they visit and for the choir.

It is, she explained, about making links and bringing Irish music and traditional songs, translated as it were via young performers to a mostly older audience with Irish roots.

The trips help make choir attractive for the choir’s older members, Susan added. “It gives them cross-cultural experience, so they develop cultural awareness and it helps them develop in terms of travel and discipline,” she said.

But the idea of singing in New York on St Patrick’s Day was not even a notion in 2012 when Susan first set up the choir. In fact, said the woman who moved back to her native Broadford and is now vice-principal of Coláiste na Trócaire in Rathkeale, she had no plans to set up anything, although she had been involved in choirs since she first qualified, working with the Clonmel Musical Society and the Glory Day Singers among others.

But she was asked to get involved in a choir from Broadford for Community Games.

In the beginning, the choir was confined to fifth and sixth class pupils but later expanded to admit third and fourth class pupils and second level students and opened up to members from other parts of West Limerick.

“When we put on concerts we make huge efforts with the staging so that it never feels like a kids’ concert,” Susan explained. “They feel they are doing something special. There is a huge investment of that kind of time and experience.”

And she is very adamant about not putting a limit to what the young singers can achieve. She cited the most recent example when the choir performed in the Concert Hall at UL along with Broadway stars Ron and Barbara Sharpe and others. “Working with people from Broadway was a huge experience and to be working with people of that standard was fantastic,” Susan said.

“When you are working with young people, if you have high expectations they will live up to them,” she declared stoutly. “The younger kids see the older ones and know they can aspire to that. They know what they are supposed to do. The older kids help out the younger ones. They help each other out in their own sections and groups.”

The New York visit however will not all be about performing. There will be the parade to see, the sights of the city and a performance of the musical Anastasia to enjoy.