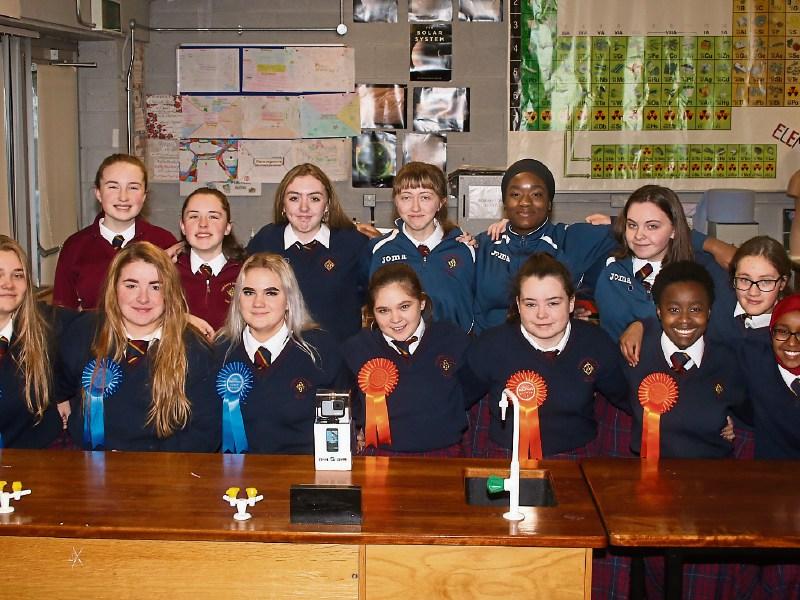 Young women in STEM: Colaiste Nano Nagle students on the road to BT Young Scientist including the winners at Scifest 2018 Picture: Adrian Butler

For the eleventh year in a row, more girls than boys are set to compete in the 2019 finals of the BT Young Scientist and Technology Exhibition (BTYSTE).

And while this indicates a positive trend in the numbers of girls studying STEM subjects at second level, the latest figures from the CSO still suggest that men make up the majority of third level graduates in the field.

“It can be difficult to encourage the students in,” Ms Walsh said.

“But we’ve found doing initiatives, such as the Young Scientist or Scifest, it really does encourage them.”

Colaiste Nano Nagle is set to exhibit two projects at the RDS; Cookies for Rookies, an awareness campaign started by students Lauren Kelly, Abbey O’Keeffe and Buki Adejomehin, seeking to educate the public on what they are consenting to as they browse the internet.

Planet Project, an app designed by Hafza Abdiwali and Elizabeth Patskhawa, aims to teach young students about the environment, including topics like global warming, pollution and the extinction of bees.

“They have been absolutely fantastic. We make it a fun event to really encourage the girls in.

“I think from this, they will go back into the younger year groups in school, and show off how they are making science relevant to them.”

“We recently visited the Eir Mobile Headquarters with the students,” she said.

“They gave a really good talk about the science of the future, showing all the girls the different career options, making it relevant to them.

“Eir took a survey at the beginning, to see how many of them would like to work in the field one day and less than a third said they would like to go that road. By the end of the tour, all hands went up so they were all converted to that career path.”

The co-ed Gaelcholáiste Luimnigh is set to send seven students to the BTYSTE RDS showcase, with three projects created by young women.

Seoda Ní Chaoimh and Muireann Ní Shé, also in fourth year, studied the use of antibiotics in County Clare.

“Once they get the exposure and the encouragement, girls can do anything,” their teacher Ciara Ní Dhrisceoil said.

“In our case at the moment, all of the teachers for Junior Cycle Science are female as well. That does help as well. They have role models who are scientists.

“There’s no shortage of opportunities for girls, especially in Limerick, and it’s just about exposing them to those possibilities, and encouraging and supporting them along the way,” she added.

“A lot of them go on to study science at third level as well. It's been very strong in the school.

“We expose them to everything that’s available, boys and girls, and they all get equal opportunity.

“The important thing is that all students are given the opportunity to go further than just the classroom content. It's up to them after that, and we will support them.”

“Their biggest influences are each other. When they see other girls, and every year the numbers are growing, they want to do it too. Influencers have a massive role in this too.”