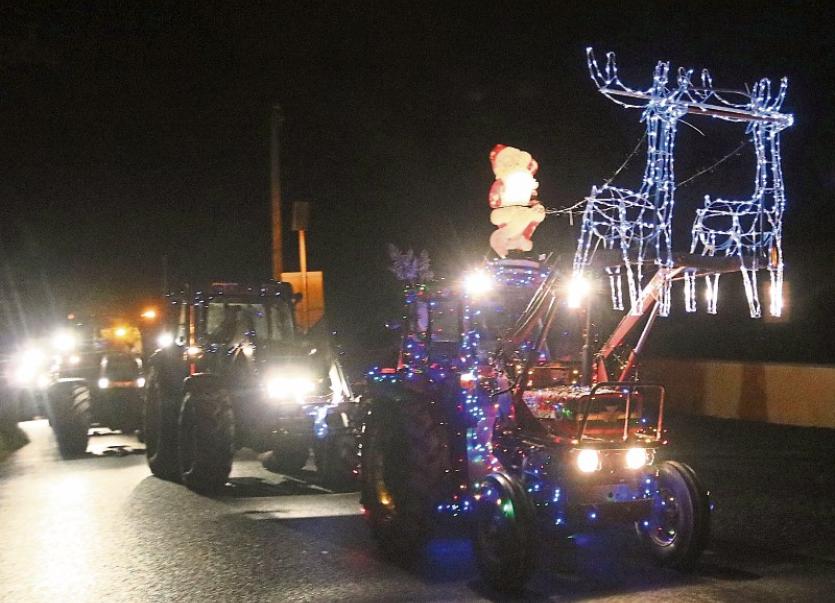 GREYBRIDGE Classic Club lit up the roads of south Limerick on their first ever night time tractor run on Friday evening.

There was no shortage of Christmas and New Year spirit as well over 60 tractors, along with a selection of cars and trucks, were decorated with reindeers, Santas,  festive lights and more.

They even had the recently crowned Macra Queen of the Land, Louise Crowley, from Croom, in their ranks.

The convoy departed from Manister Community Centre. The run took in a number of villages where they were met with great local support along the route. The first stop was Bruff where they met the team from Carebright.

Fiachra Liston, chairman of Greybridge Classic Club, said unfortunately due to the volume of tractors on the night they were unable to travel down to the centre itself.

It was a good complaint as organisers didn’t know what response the inaugural tractor run would have.

“It was great that the team came to meet us on the Main Street and the club was delighted to provide a contribution to this unique facility designed for people living with dementia,” said Fiachra.

From here the motorcade moved on to Athlacca, into Bruff and travelled on across the Bruff line for a quick call in to Caoimhe’s Lights. Then it was across to the Coolruss Christmas lights.

“Both of these families do an amazing job each year in lighting up their houses in aid of charity and we were delighted to make a contribution to their nominated charities. We’re very grateful for them for facilitating our visit. It certainly added to the great atmosphere,” said Fiachra.

Their final pitstop was The Rock bar in Granagh where the judges had the tough task of nominating the first ever winner of the Greybridge best dressed Christmas tractor.

Pat Morrissey, who put some serious effort into his machine, was the worthy winner. He made sure Rudolf’s shiny red nose was well co-ordinated with a shiny red Massey Ferguson 135 as the sleigh.

“It was a well deserved win for Pat, huge congratulations to him and thanks to all who put in such effort to decorate their tractors. It was certainly a unique sight to see! This was something new for the club to try and we were delighted with its success,” said Fiachra.

But as with any of these events, its success is always due to the help and support that you receive, he said.

“We would like to pay special thanks to all those who provided catering at Manister, Declan Geary’s and The Rock bar in Granagh, to all the villages who supported us, to all of those who came out to support us on the route and in particular huge thanks to our fantastic team of marshals and the gardai, who escorted us on the entire route to ensure the safety of everyone involved.

“It all contributed to a great atmosphere on the night and enabled us to provide a well deserved contribution to our nominated charities of Carebright, Cliona’s Foundation, Coolruss Christmas Lights and Caoimhe’s Lights,” said Fiachra.