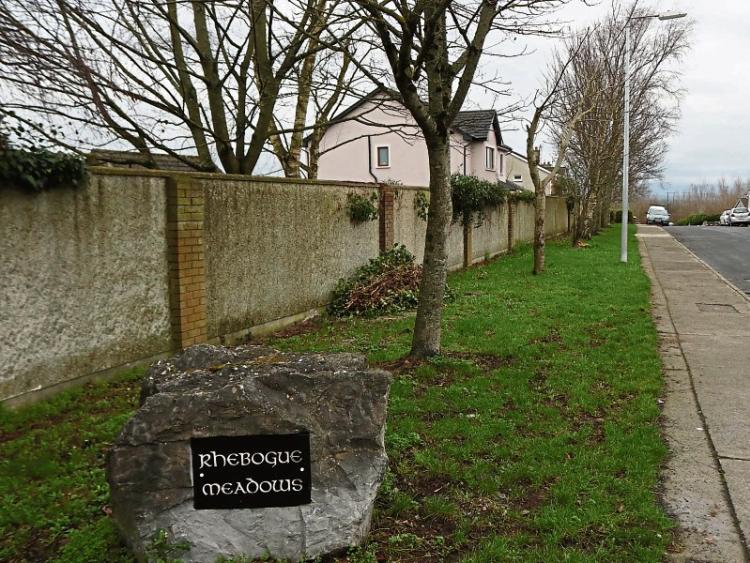 The green strip of land at Rhebogue Meadows

A LAND dispute erupted between a Limerick residents association and a property owner after it expressed concerns over their “precious green space” being “destroyed” due to an proposed housing development.

On December 19, Limerick City and County Council gave the green to the erection of two dwellings with a shared entrance and the site’s sub-division in Rhebogue on the Dublin Road.

After the applicant Michael McNamara submitted plans on September 14 last, the Rhebogue Meadows Residents Association (RMRA) lodged its concerns with the council on October 18.

Its chairperson Michael Hennessy said the residents of Rhebogue Meadows—which he said has been in existence since 1992—“lay claims of ownership after 26 years of nurturing and maintenance of same said green area”.

Mr McNamara provided a Land Registry document and details on the site entrance on December 3.

The space comprises a green strip, a stone that states “Rhebogue Meadows” and 11 trees, one of which will have to be removed to accommodate the site entrance, according to planning files seen by this newspaper.

He stated they were concerned about the removal of the green space as they had won a Going for Gold award and “the JP McManus fund” for the “residential in bloom” category in 2018.

“It recognises our work since 1992 to the present day,” he said, adding that green spaces in urban settings are important for wildlife, pedestrians, dog walkers and birds.

“To have an area of such natural beauty at the entrance of the estate is very unique, especially when in full bloom, with the backdrop of the Clare Hills in the distance is rare and to allow part destruction is irreplaceable to a small community like ours,” he said in the letter.

Mr Hennessy urged the authority to allow the development of the two houses, but requested that an existing entrance be used for the site “as it would reduce significant cost on breaking through a boundary wall while having a carbon neutral effect on the environment”.

He said that this would “reduce any stress on neighbours in Rhebogue Meadows and we would not lose our precious green space or have it destroyed by non green materials”.

He argued that there is a “significant risk of accident or injury” by having a double entrance so close to Rhebogue Meadows estate entrance.

Following this correspondence, Limerick City and County Council sought proof of land ownership of the green strip of land and clarification the shared site entrance, on November 7. Granting Mr McNamara permission for the development, the council said it will require a contribution of €5,594.

It is understood that the residents association is considering taking the matter to An Bord Pleanala.