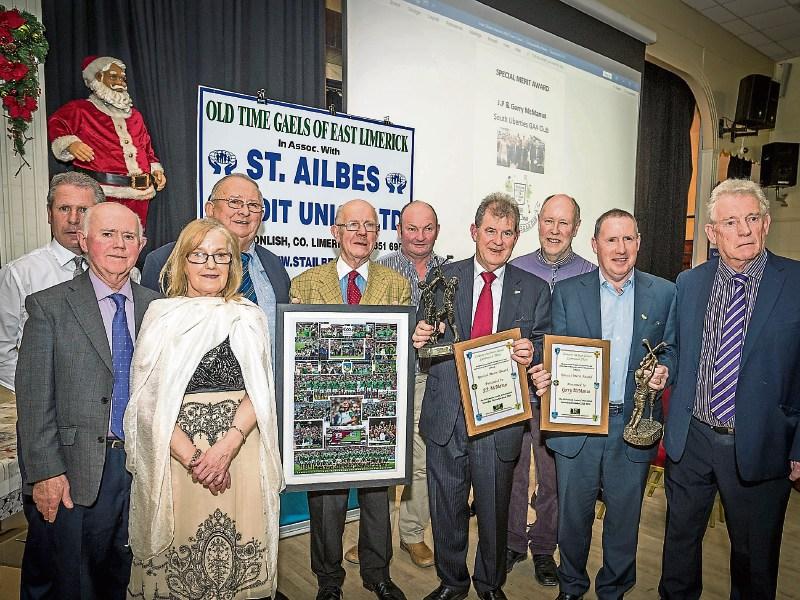 LAST year was a very good year for Limerick GAA but there have been many, many bad ones.

The Old Time Gaels of East Limerick was founded in 2003 to acknowledge the contributions of Gaels in the division who have given lifelong, voluntary and dedicated service to the GAA over the years. Many worked quietly in the background in areas like administration, fundraising, field maintenance, refereeing and endless other important chores. Others excelled on the field of play and brought honours to their clubs, division and county.

The committee congratulated John Kiely and John Ryan for leading Limerick teams to All-Ireland glory in 2018. They received outstanding achievement awards. Two special merit awards were given to JP and Gerry McManus.

JP McManus showed how highly the honorary scrolls are regarded by flying back from a race meeting in England for the ceremony, held just before Christmas. It was on in the Millennium Centre in Caherconlish and was kindly sponsored by St Ailbes Credit Union.

“We pay special tribute to JP and Gerry McManus for their vision, ambition and passionate support to which Limerick GAA at all levels has prospered.

“Their contribution to Limerick GAA has proved influential, inspiring and successful and the fruits of their involvement paid dividends on August 19,” said Ger O’Connell, secretary.

“The late Robert O’Dea, of Kilteely-Dromkeen, receives the prestigious Tom O’Brien personality award. It is dedicated to the memory of the late Tom O’Brien, of Doon, who gave so much to the promotion of our games in the division, before passing away at such a young age.

“It’s ironic that the late Robert receives this award as he himself gave so much to the GAA and passed away at such a young age in 2018.

“The referees award is in memory of the late and great Jimmy Butler Coffey, of Cappamore. East Limerick has a proud tradition of producing top class referees and the recipient is the late Jimmy’s son, Patsy Coffey of Cappamore,” said Mr O’Connell, who described the night in Caherconlish as a fantastic end to a fantastic year for Limerick GAA.

“As a committee, we feel honoured to share the awards night with these worthy recipients, their families and friends, as well as officers and representatives from the clubs.

“We express our sincere gratitude to the Millennium Centre staff.  We also thank our main sponsor St Ailbes Credit Union for their continued sponsorship and loyal support,” said Mr O’Connell.